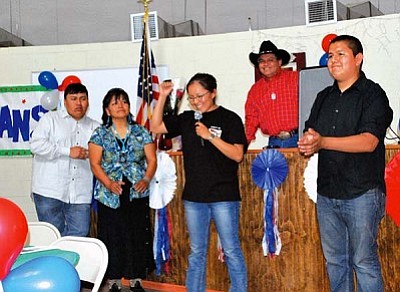 <i>Courtesy photo</i><br> Sgt. Karla Curley (center) addresses family and friends during a recent gathering held in her honor. On stage with her are (from left) Kyle Curley, mother Patricia Yazzie, Kevin Curley and event emcee Thomas Yazzie. Sgt. Curley had just returned from a 12-month tour of duty in Iraq.

BIRDSPRINGS, Ariz. - U.S. Army National Guard Sgt. Karla Curley, who served with the 2220th Transportation Company out of Tucson, was welcomed home on April 15 by hundreds of family and community members after a 12-month-long tour in Iraq. Curley joined the National Guard in 2004 while in high school and has since completed two tours to Iraq.

The daylong celebration began with a three-mile horse ride from the Curley residence to the Birdsprings Chapter house, concluding with evening entertainment by the Hopi Clansmen.

During the reception, former Navajo Council Delegate Leonard Chee gave the invocation and acknowledged Curley's service in Iraq. "On behalf of the Navajo Nation, I want to thank you for your service to our nation," Chee said.

Drum group New Boyz from Teesto honored veterans with a Veteran and Flag Song. Radmilla Cody and Joe Tohannie each sang several songs to entertain the crowd and Justin Solis of Winslow and Jocelyn Yazzie of Dallas, Texas played Taps for those veterans who had passed on.

Curley said she joined the National Guard after graduating from Winslow High School. She is currently majoring in elementary education at the University of Arizona and has three semesters remaining to earn her degree. She is attending UA with her younger brother Kevin and joked, "I'm taking a long time to finish school. We will probably finish at the same time. But I want to say that the military is great place to learn leadership, responsibility and find personal courage. I'm glad to be home and continue my education and I want to thank my family and everyone else that supports the military."

With family having planned the event, it became larger than expected. A total of 26 veterans and their families also attended the event, which was organized by Curley's mother, Patricia Yazzie. She said she was happy that her daughter received a large welcome home celebration, stating, "I want to say a special thank you to my mom and my family that came together to make this happen."

Curley's father is Carson Curley. Both of Curley's parents are from Birdsprings while various family members traveled from across the southwest to see one of their own return home.