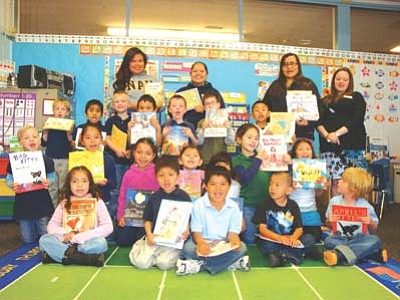 The seven Scholars rose bright and early that morning to make it to the school by 8 a.m. Lyman Paul a Civil Engineering expressed that "no matter what time of the day it is, as long as it's for the kids I'm there."

The determination and desire of Lyman and the six other scholars showed their passion to reach out to the Flagstaff community and make an impact to improve the quality of life for the kindergarten students and teachers of Lura Kinsey Elementary School.

Mrs. Salina Kinlicheeny, one of the four kindergarten teachers at Lura Kinsey Elementary School, was ecstatic with NAU GMS's willingness to go above and beyond.

"When NAU GMS contacted me about conducting a community service project they shared with me that they were willing to come to the school, read to the students, and share the importance of reading. I didn't think that they were going to provide all the kindergarten students and classes with books. It is amazing to see these Scholars take the initiative to sacrifice their time and money to reach out to the Flagstaff community," she stated.

When asking students of Mrs. Kinlicheeny's kindergarten class the question of why is reading important? Elaine Benally and Ann Salt were amazed with the students' responses. One student commented that "reading is important because it helps you learn." Another student shouted, "If you read then you can do good in school and can go to college."

After reading to the kindergarten classes and explaining why reading was important, the scholars presented the students with a book that they would be able to read at school and take home with them.

Excited with their new book the students quickly rushed to the nearest scholar to say thank you, and shared a hug of appreciation.

Elaine Benally, a Public Relations and Advertising major, added that "reading to kindergartners definitely brightened my morning, they're so cute I almost cried when they hugged me goodbye."

Simon commented, "Although NAU GMS was created late in the spring 2011 semester it is great to see the ambition of the scholars to come together and make a difference in the NAU and Flagstaff community. I am looking forward to working with the scholars that are currently involved in NAU GMS and looking forward to having other scholars on campus have a proactive role with NAU GMS for the 2011-2012 Academic Year."

"After all," he concluded, "the Gates Millennium Scholarship selects candidates for the scholarship based on their potential to be future leaders of America."