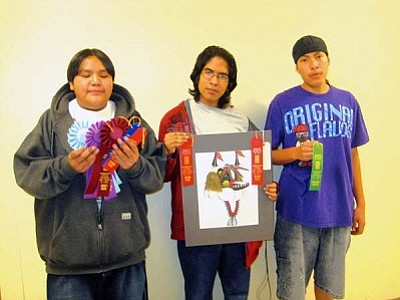 Rodriguez Poleahla, a freshman at Hopi High, won the top Best of Show award for his kachina Black Ogre. His Black Ogre also won Best of Division II, one of the Judge's Choice awards and a blue ribbon in the cultural items category.

Poleahla, 16, said he was proud to win all the awards.

"I've been carving since I was seven," he said.

The kachina was made from cottonwood. He painted the kachina black, white and red. It took him two days. His Black Ogre was sold at the Heard. The museum takes 20 percent and he gets the rest.

Poleahla said he was also proud of all the awards that his classmates won. His art teacher Mary Duwyenie congratulated him for winning the top award and the other awards.

He is considering a career in art, but said he likes to carve for fun during his free time.

"My advice for students who want to win Best of Show is keep up what your doing, don't give up and believe in yourself," he said.

He is the son of Wayne Poleahla and Felicia Namingha. They live in Shungopavi.

The other Hopi High art awards went to: Harold Lomayaktewa, Judge's Choice Award for his painting of Mystical Night; Vance Quamahongnewa won two awards for his baskets. One award was a blue ribbon for his Butterfly basket and a red ribbon for his cradle board basket.

Bryon Quamahongnewa won two awards in the cultural item category. He won a green ribbon for hoe'te and a red ribbon for his cow.