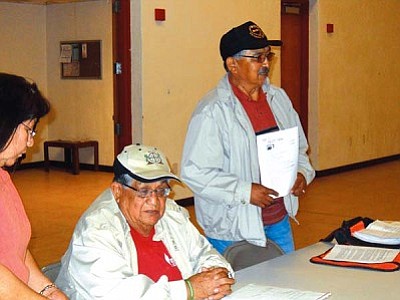 HOTEVILLA, Ariz. - The first public meeting of the Hopi Silent Majority political group met on April 13 at the Youth and Elderly Building to begin organizing a movement to remove Hopi Chairman Leroy Shingoitewa for alleged violations of the Hopi Constitution since he took office in January 2010.

Former Hopi Tribal Secretary Mary Felter, along with former council members Phillip Quochytewa and and Jerry Sekayumptewa, acted as moderators and facilitators for the meeting. Approximately 31 Hopi members from various villages were in attendance.

The group cited three specific areas where they feel that Shingoitewa has violated the Hopi Constitution, starting with the misuse and misinterpretation of "Final Answer and Opinion for Bacavi Village" dated Feb. 11, 2010. This summarizes whether individual Hopi villages have the authority to remove their council representatives at the village level.

The court summarized that the villages hold the power to appoint or remove their respective representatives.

But according to the Silent Majority group, they feel Chairman Shingoitewa has chosen to use this appellate court answer to determine who can and cannot be seated on the Hopi Tribal Council.

They also expressed concern when Chairman Shingoitewa seated the three current Sipaulovi village representatives who had not been sanctioned by the village "kikmongwi" as required by the Hopi Constitution. Instead, the chairman accepted a letter from Lorena Charles, recognized only as a "clan spokesperson" for Sipaulovi village.

According to Quochytewa, this selective seating of Hopi council members has reduced the council from 21 members to 14.

The second violation the Silent Majority group feels the chairman has committed stems from a memo dated Nov. 8, 2010 and signed by four Hopi council representatives requesting a special council meeting that was called in accordance to the Hopi Constitution, Article 2, Section 3.

The meeting was held to discuss the reinstatement of Russell Mockta as Hopi Tribal Treasurer, the termination of Joseph Begay as Hopi Finance Director, and to authorize a full forensic audit into the actions of Shingoitewa and Begay concerning the financial affairs of the Hopi Tribe including, but not limited to tribal investment accounts and the expenditure of tribal funds.

This special meeting was never conducted, with no explanation or formal discussion at the council level to any of the four requesting tribal representatives or their respective villages, though once the formal request is made by four representatives, the meeting must be executed.

The last area of concern expressed by Quochytewa was the tribal contract for current Hopi interim general counsel Robert Lyttle, who has been under public scrutiny since last summer, after his interim contract, signed off by Shongoitewa, had exceeded the original 180 days and therefore did not meet Hopi Constitution protocol for legal contracting assistance.

Also in question are the associate attorneys that Lyttle brought in to work with him who were never specified by name or title in the original contract, but are being paid $275 per hour. Lyttle himself was receiving $375 per hour with benefits, even though he was not a member of the Arizona State Bar when he was hired.

There was considerable discussion on how the Silent Majority would proceed in the removal process since there are no provisions in the Hopi Constitution for a recall or removal of officers, except to find an officer guilty of serious neglect of duty. The group stated they would have the strategy defined for the next formal public village presentation slated for the next two weeks at Kykotsmovi Village. Times and dates for the next series of meetings will be posted in the communities.

Steve Youvella, a concerned village member from First Mesa, said, "It's obvious that there is a lot of community concern over Shingoitewa as chairman; the way he does business and how he does not provide clear information to his own people, and many are looking to see him removed from office. There are also concerns about some of the people [he] has working for him ... A lot of Hopis don't publicly express their opinions, but we know that ... Lyttle is dictating a lot of movement [and] we are now finding out that [he] has given some bad legal advice to other tribes and now he is doing it to us. Our own council isn't even paying attention to this or even doing anything to correct the situation. I encourage the Silent Majority group to go forward with this removal effort ..., but we need to do it in the right way so it will stick."

Additional information about the Silent Majority group and their upcoming presentations can be obtained by e-mailing informhopi@yahoo.com.