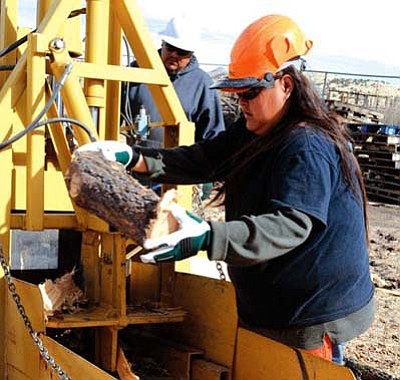 <i>Kate Dorrell, ERI/NAU</i><br> Anjelita Apachito is the safety officer for the Alamo Navajo Project. From this small lumberyard in Socorro, N.M., she and others are carving a wood products niche out of small-diameter trees that few people wanted.

FLAGSTAFF, Ariz. - Hope for forests and communities at risk is spreading like wildfire in an isolated village south of Albuquerque, N.M. Northern Arizona University ecologists say what's happening on the Alamo Navajo Reservation could well be a model for forest restoration across the Southwest where there are too many trees and not enough jobs.

In a small lumberyard in Socorro, N.M., young adults are learning how to cut down trees, operate logging equipment and split firewood. Derek Padilla is the crew leader.

"This project is helping me because it's near my home on the reservation," he stated.

The Alamo Navajo Reservation consists of only about 2,000 people. Nearly 70 percent are unemployed and most are living below the national poverty level. Nearby is the Cibola National Forest, unnaturally thick with pinyon and juniper trees. The area is considered New Mexico's most dangerous place for homes and businesses during fire season.

"We've removed natural fire from a lot of the ecosystems throughout the West," says Wally Covington, Arizona's director for the Southwest Ecological Restoration Institutes (SWERI) and Regents' Professor. "That has allowed forests to build up these ground fuels and ladder fuels and that's what we're trying to deal with across millions of acres. We're trying to mimic what science tells us would be a more natural condition."

To achieve this desired condition, Covington says a trained labor force and a market for small diameter trees will be essential. In the Alamo Navajo Project, SWERI is providing training along with equipment, such as wood splitters and yarders. The collaboration also includes financial and in-kind assistance from the U.S. Forest Service.

"A similar model could help facilitate efforts in northern Arizona where the nation's largest forest restoration project, the Four Forest Restoration Initiative (4FRI), is in the planning stages," Covington says.

The 4FRI aims to treat some 2.4 million acres of ponderosa pine across the Mogollon rim during the next 20 years. NAU researchers are providing ecological restoration science findings to the Forest Service to achieve landscape-scale forest health.

"We now have people here who are trained in felling, trained in primary processing and trained in restoration monitoring," says New Mexico's SWERI Director Andrew Egan. "They are really making New Mexico forests healthier and making New Mexico a safer place to be because we are reducing the impacts of potential wildfires."

With the restoration institutes, the Alamo Navajo School Board has created a wood products program out of trees that nobody wanted. "We sell firewood all over the country," says the school board's Natural Resource Specialist Bill Ferranti. "Our biggest market is in west Texas. We shipped some to Chicago. We shipped some to North Carolina. We shipped more than 300 cords last year."

It's a collaboration supported by Old Wood. Owner David Old is building a business out of sticks and branches in Las Vegas, N.M. "The whole plant is really scaled and geared for making flooring from smaller trees. We are not about cutting down the big trees."

If his idea stacks up, Old will construct a new foundation for some 50 employees in a $2-million-dollar a year operation. Old Wood's first order for pinyon wood flooring cut by the Alamo Navajo crew is scheduled to go to a San Francisco restaurant.