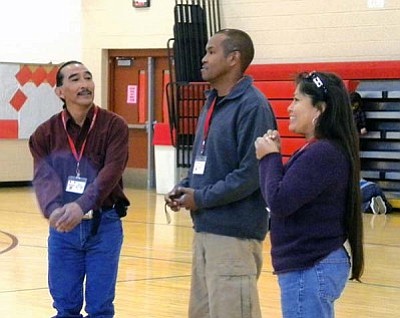 From March 7-11, members of HAASA went to different schools on Hopi to spread the word of the upcoming Sobriety Challenge Week activities and to have them sign sobriety pledges. The assemblies consisted of each HAASA member letting students know who they were and the services they offer the community.

Various contests, such as an ugly face contest, were held to bring attention to how drugs can make people ugly. HAASA members also led students through cheers of "Don't Do Drugs" and other sobriety chants. Law enforcement officers as well as wellness workers were also on hand to bring awareness to the students.

Those events kicked off Sobriety Challenge Week activities, starting with a fun/run walk at the Hopi Veteran Memorial Center. Nearly 100 participants ran and walked with flags representing individuals lost to drugs and alcoholics well as individuals in recovery. Many HAASA members were on hand with informational booths to bring awareness to the services that are provided to the Hopi people. Arlene Honanie, HAASA treasurer, stated that the highlight of the week was when the flags were carried by the children. The red flags represented people lost to drugs and alcohol but the white ones were for those in recovery.

"It made me very emotional to see all the children with white flags and had a powerful effect on me," she said. "In the future I would like to see more HAASA activities involving children."

Eldon Kalemsa from the Tobacco Prevention Program stated, "There was a lot of good feedback from the public regarding the presentations and the appreciation from the public about the different programs coming together."

Kalemsa is the vice-president of HAASA and teaches youth about the harmful effects of tobacco. "That is why I got involved in HAASA to educate the people about ... commercial tobacco," he said.

One highlight of the weekend was the Family Night Talent Show. Many individuals and their families attended the event with their families to enjoy local talent. One individual that performed was former HAASA president Deborah Baker who sang a song for the audience. An individual in recovery did a recovery rap and a band performed. A special appearance was made by the police K-9 unit as well.

HAASA would like to thank everyone that donated and volunteered to make this event a success.