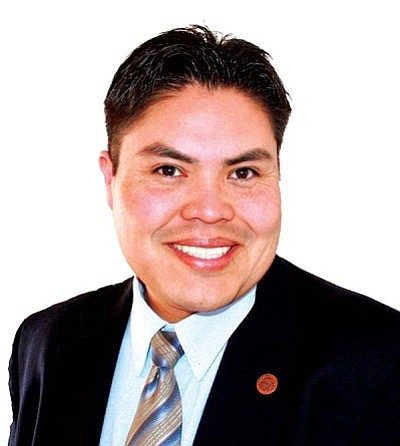 "I thank the Council for having the confidence in me to represent the Navajo Nation on the Arizona Indian Gaming Association," Butler said. "The Navajo Nation is a newcomer to Indian gaming, but we have made great strides in such a short time and strong advocacy is greatly needed in order to protect our interest ...."

Butler joins the AIGA as its Executive Committee Secretary, pledging to represent the Navajo Nation as it works to diversify economic development.

"We must also work to diversify economic development on the Navajo Nation, and not just focus on the gaming industry," Butler said. "We must look at tourism, arts and crafts, and helping small business owners get established within the local economy of our new gaming areas."

The AIGA serves as a clearinghouse as well as an educational, legislative and public policy resource for tribes, policymakers and the public on Indian gaming issues and tribal community development. It is a non-profit organization and has a membership of 19 tribes representing 90 percent of Indian people living on reservations in Arizona.

Councilwoman Linda Evans of the Yavapai-Apache Nation has served on the AIGA executive committee for nearly a year and a half, and she welcomes Butler's initiative to help move the association's efforts forward.

"He will be a valuable asset to the organization due to his [prior work] in the public relations industry," Evans said. "As a former communications director, he knows the news media and will help the association in the decision-making process. He's a good candidate to not just represent the Navajo Nation, but all of Indian Country in this state."

With gaming, the Navajo Nation hopes to strengthen self-sufficiency, depending less on the federal government. Butler states that while gaming isn't the answer to all the Nation's economic problems, they need to focus on the benefits of employment and job training. Current unemployment rates on the Nation are soaring past 50 percent and approximately 75 cents of every dollar is spent off the reservation, Butler said. His plan is to keep those dollars on the Navajo Nation.

As Navajo adds more casinos to its enterprises, Butler stated that he plans to address social problems that may arise due to gambling on the reservation.

"As an advocate for the health and well-being of our Navajo people, I have an agenda to also promote and bring much more attention to the negative impacts of gaming, such as neglect, domestic violence, alcoholism and gamblers addiction," Butler said.

Butler was appointed to the Human Development subcommittee of the Navajo Nation Council. This committee will eventually act as the oversight committee for the tribe's Divisions of Social Services, Health and Education. The Navajo Nation Council has also formed a gaming task force to assist in gaming compact negotiations and other related matters. Members include Butler, Council Speaker Johnny Naize and Council Delegates Jonathan Hale, LoRenzo C. Bates and Edmund Yazzie.