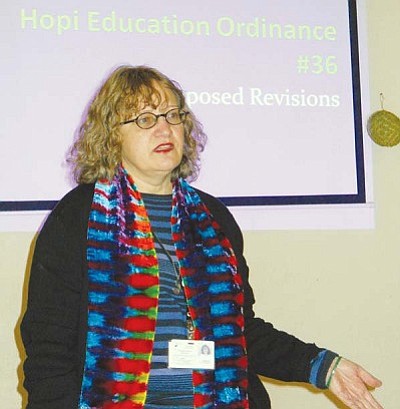 <i>Rosanda SuetopkaThayer/NHO</i><br> Catherine Wright, current Director of the Hopi Board of Education, has been making public presentations on the revision of a 30-year-old Hopi Education Ordinance Number 36 in the hopes of making much needed changes for overall Hopi education progress.

HOPI RESERVATION, Ariz. - In the past two and a half years, the Hopi Board of Education (HBE) has been meeting with local communities and parents to make improvements to Hopi Tribal Ordinance 36, hoping to move the 30-year-old law into the 21st century.

The HBE was charged with this responsibility in 1997 by the Hopi Tribal Council because the Hopi Department of Education director had not made the changes as requested, and also suggested within the law itself for a recommended ordinance policy update every two years.

The HBE is comprised of representatives from every school board on the Hopi Reservation and is headed by Cathy Wright, a former attorney who currently serves as the HBE Director, along with administrative assistant, Anita Fred.

Taking on the responsibility of supporting and nurturing quality education for every child attending school on Hopi while addressing Hopilavayi concerns is a complicated task, and one that each member takes seriously.

There has only been one formal revision to Ordinance 36 over the past 30 years and since that time, Hopi High School was added to the HBE although they have been in existence for over 20 years.

A big part of the new revision includes a clear delineation of what roles each entity that deals with Hopi education will have. The new draft outlines the advocacy role of the Hopi Department of Education Director along with the HBE Director to assist in providing administrative support to the HBE board in supporting local schools in policy development and programs.

Because Hopis have always believed in and have always practiced "consensus building" as one of its strongest cultural and tribal partnership building traits, the HBE, by example shows that by uniting each of these school boards in one larger, reservation-wide board, it enforces sharing, support and exchange of information from one school to another.

In these days of serious education competition, there is strength in numbers and this unified HBE effort to make changes to the Hopi Tribe's education endeavor not only makes sense but shores up academic areas that need improvement and change.

Hopi Day School is the only Hopi school who refuses to participate in HBE improvement process. Principal John Thomas made this formal by passing a resolution to boycott HBE ordinance changes this past year, with Thomas making a public comment at one of the village meetings that the new ordinance would eliminate "all local school control."

But a thorough look over the new draft does not reveal specifically where in the current revision this will take place. In fact, the new draft is very specific that "all local participating school control will be supported by HBE" in Section 8, Organization, Powers and Duties of the Local School Boards.

If a "Best Practices" education approach could be implemented by an Ordinance 36 revision, the successful Hopi schools could share openly and generously with the other schools who did not make AYP to help make every school on Hopi successful, thus providing all students a nurturing, enriching and state standards approved educational experience.

The HBE members also recognize both tribal language and cultural needs for Hopi students. Also included is a statement that the HBE supports outside Hopi educational institutions like Hopi Tutuqaiki, a summer art resource private school that features award winning visual and performing artists as its master teachers.

It has taken two years of continued meetings with parents, community members, tribal entities and school board members to get the new draft revision this far and the recent public meetings also reflect community and parental comments and suggestions that were made during these presentations over the past two months.

Wright stated, "This is a great opportunity to finally bring Hopi education law into the 21st century. The proposed new revision has removed the obsolete sections and included new sections like Hopilavayi, vocational education, school facilities and mandatory education and student rights. There is also a section on the Hopi education department that outlines the role the director will play with the HBE director to support local school control. Finally, the new revision proposes changes to the composition of the HBE membership, which will include new representation by Headstart, VocEd and also the Hopi Grants and Scholarship [Program] in order to cover the entire gamut of Hopi education."

A comment made by Daryl Pahona who serves as the HBE representative from Second Mesa School said, "It's about time that we Hopis start making our own plans and goals for our children and grandchildren in the area of education. We have relied too long on non-Native outsider administrators and BIA, Anglo-controlled ideas about what is best for us as Hopis. We must support and help our children, so they can be ready for a career anywhere, not just here at Hopi, but outside the reservation if that is where they choose to live and work. We are in a new century now and its time our education code catches up to that."

Hopi Education Director Dr. Noreen Sakiestewa was contacted for formal department comments to Ordinance 36, but no response about the HDE's role in the new revisions that have been taking place was received by press time.