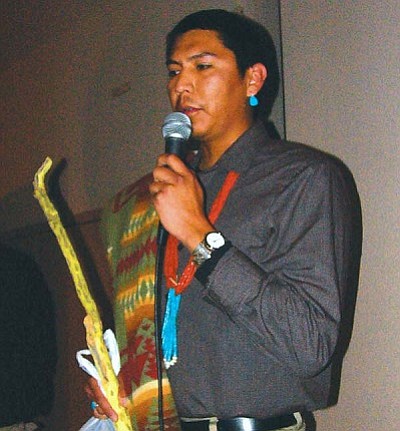 GALLUP, N.M. - The award ceremony for the Justin Willie Agricultural Humanitarian Award began with a moment of silence for all past, present and future veterans. Willie served in the Marine Corps before establishing himself as a dedicated traditional Diné farmer, permaculturist and teacher.

The event was part of the Ninth Annual Southwest Marketing Network Conference, March 30-31.

The Southwest Marketing Network was initiated to increase regional marketing expertise and opportunities for farmers and ranchers in the Four Corners states of Arizona, Colorado, New Mexico, and Utah.

James Peshlakai said that the idea for the award was born during the Third Annual Gathering for Mother Earth that the Peshlakai family hosts each year.

Jamescita Peshlakai, who emceed the event, described Willie as very influential in the movement towards indigenous farming and slow foods.

"Maybe a lot of people don't know about [Willie]. We want to recognize people who won't be recognized otherwise," Peshlakai said.

"He was free-spirited. He loved nature and lived an adventurous life," Lee said. "He loved hiking, camping, rafting, and held various jobs in the horticultural and farming area."

She went on to describe Willie's work with native Hawaiians and followers of the "slow food" (as opposed to fast food) movement, taking him to far-flung places like Italy.

"He was proud to share his skills, knowledge and culture," Lee added. "His greatest attribute was his generosity and desire to make changes for Mother Earth. He had a great concern for the land and a great respect for elders. I am honored that his legacy is being promoted at this event," Lee added.

The award was presented to Ben, who was visibly touched by the honor.

"Oh, my gosh! I'm totally overwhelmed and emotionally excited to receive this award," he said.

Ben said that he hadn't had the honor of meeting Willie before his passing, but that his work at the Leupp Family Farms brought him into contact with so many people who had known or worked with Willie.

"I have come to have a real sense of his life, and I'm excited to continue that work," Ben said. "I've enjoyed the sense of welcoming from the people in Leupp, coming from another part of the reservation.

"It is exciting to me [as a traditional farmer] to see that an individual outlives the work that they do, and that the work you do is appreciated and worthwhile," Ben said.

First runner up for the award was Alvin Harrison, who was nominated by his daughter.

"I'm honored to accept the award. It's pretty amazing what one person can do," Harrison said of Justin Willie. "We are all doing what we can do, following in Justin's footsteps.

Both young men received a plaque and a traditional digging stick. Ben was gifted with a Pendleton blanket and a large quantity of heritage seeds. Harrison received a backpack stuffed with various supplies, reminiscent of the backpack Willie traveled across the country and world with.

The decision was not an easy one for the various friends and family members of Justin Willie who comprise the award committee.

"We would give the award to every one of them if we could," Jamescita Peshlakai said before announcing the winners. Peshlakai represented Dine Inc.'s Navajo Nation Traditional Agricultural Outreach.

"You are all winners-nobody lost. You people are doers," award committee member Roberta Franklin said. "You make it happen. Then there are those who wonder, 'what just happened?'" Franklin said to applause and laughter.

"There were many people who helped in establishing this award," Franklin continued. "Those who couldn't do physical labor helped us with food. This was a healing process for us who knew [Willie]."

Friends and students of Willie also spoke to the crowd, including Tom Tomas who once taught Native Science with Willie, and his eighth grade students from STAR School, Kira Butler, Brianna Hudgins and Keanu Jones.