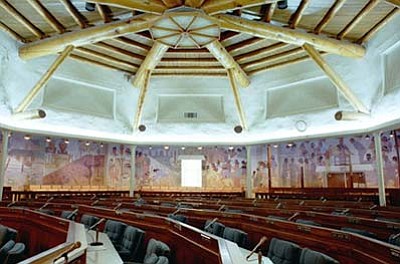 WINDOW ROCK, Ariz. - The Navajo Nation Council on Wednesday convened for a special session and tabled the Northeastern Arizona Indian Water Rights Settlement, which would have resolved water rights claims between the Navajo Nation and Hopi Tribe. Both tribes are in settlement for water from the Little Colorado River System and from the Lower Basin of the Colorado River and have until Oct. 13 to execute the settlement agreement.

In his motion, Johnson directed the Navajo Department of Justice and Navajo Water Rights Commission to educate the Navajo people on the content of the water settlement within one week. Currently, there is a "stay" in the Arizona state court concerning the Lower Colorado River and in the federal court concerning the Colorado River. Both tribes have until Oct. 13 to execute the settlement agreement. With no agreement more litigation would occur.

Johnson's motion also directs the Navajo Nation Council to convene before Oct. 13 for a work session to discuss the settlement thoroughly before a decision is made at a special session.

In other action, the Council passed the Diné College Board of Regents Act of 2010 by a vote of 61-6. The act amends Title 10 of the Navajo Nation Code and allows for the election of five members of the eight-member Board of Regents to serve four-year terms beginning with the 2012 Chapter elections. The act keeps the Education Committee Chair, the Navajo Nation Superintendent of Schools and the student body president of Diné College as ad hoc positions.

"We waited on whether President Joe Shirley Jr., would appoint these positions and that has not happened, which is why this legislation came about today," said legislation sponsor Danny Simpson (Huerfano).

The resolution also authorizes the Education Committee to appoint interim members to fill five Board of Regents vacancies, with the Government Services Committee (GSC) confirming those positions. On April 27, the GSC took action and removed three members from the eight-member Board of Regents leaving the board with no quorum to conduct business. Before removal, the Board already had two vacant positions, which is another reason the Council passed the act.