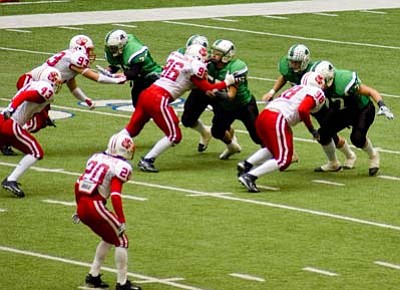 The Winslow Bulldogs lead the 3A North Region with a 3-0 regional record and a 3-2 season record after their 54-0 stomping of the Chinle Wildcats at Chinle on Friday. Holbrook won the battle of regional unbeatens at home over Window Rock 30-20 to reside in second place by themselves. The Roadrunners will meet the Winslow Bulldogs at Winslow in Winslow's homecoming game on Friday. The winner of that contest will have sole possession of first place and a likely state playoff berth. Holbrook has victories over both Window Rock and Monument Valley, two regional teams in the running for playoff berths. Winslow has tough regional games left against Window Rock and Monument Valley, both on the road.

Window Rock fell to 1-1 in the region and 4-1 for the season with the loss to Holbrook. The Scouts will host the tough 3A East Region Round Valley Elks on Friday in a non-regional contest. The Scouts have tough games left against Winslow, Monument Valley and Chinle.

Chinle fell to 3-2 for the season and 0-1 in the region with the 54-0 loss to Winslow. The Wildcats will be at Ganado on Friday to meet the Hornets in a regional contest. Ganado lost to Monument Valley 14-8 on Friday to fall to 0-2 in the region and 1-3 for the season. Chinle remains a possible contender for a playoff berth but has tough assignments against Monument Valley, Holbrook and Window Rock making that a difficult goal.