Letter: Navajo and Hopi leaders- save our resources 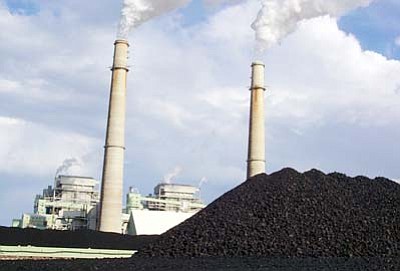 At the Western Agency Council (WAC) meeting in Tuba City on Sept. 18, a resolution was presented to the WAC, requesting to the Resources Committee to renegotiate the Lease Reopener with Peabody Coal Company by upgrading the lease to a rate beyond the 12.5 percent, including other associated offers by Peabody.

So what is going on here? There's something fishy about their resistance.

You would think these leaders understand that our people are suffering the lack of tribal funding required for all their basic, dire needs of water, electricity, good roads, etc., while all the faraway cities are enjoying the benefits from our resources. Our leaders are again looking to continue selling our high quality coal dirt cheap.

Two coal leases on Black Mesa - Kayenta and Black Mesa Mines - were agreed on in 1964 and 1966, respectively. At the time, the Navajo Nation and Hopi Tribe were literally cheated out of their high quality coal for dirt cheap prices. The leases were amended in 1987 where a 12.5 percent royalty was imposed and to date remains the same in spite of the rising cost of living, not to mention that coal prices on the open market have increased since 1987.

That is a period of nearly 15 years; prices of everything we purchase today have tripled and here we are with leaders going along with the notion that everything is copasetic.

We lost Mohave Generating Station in 2005; P&M mine just shut down in December 2009; the Four Corners power plant is threatened to be shut down by the Environmental Protection Agency. And with the Navajo Council's careless spending, the Navajo Nation is in the red by $24 million. For crying out loud, how do we get these leaders to come to their senses?

Presently there is another proposal scheduled to come before the Navajo Nation Council during the Sept. 29 special session. This proposal is an attempt by the government and corporations to "trick" the Navajo Nation. The proposal states that 31,000 acre/feet of water will be offered to the Navajo Nation, and that if the council approves the offer, they will agree to never sue the corporations, energy companies and government ever again. This simply means we won't be able to force better deals for our resources, including our land, water, and whatever other precious minerals that may be within our land for upcoming generations of our children, their children and so forth.

It has become obvious that the government and corporations have realized that Navajo and Hopi are aware of the deceitful nature of past dealings on their leases with them. If the council agrees to this new proposal, we will lose the rest of what we have left, forever. For the sake of our present needs and our future generations, the council should vote this proposal down.

Our precious resources are being used up by these corporations and getting rich with our resources while we go without. Look at the billions of gallons of water going to Phoenix, Tucson, and other tribes in southern Arizona by way of the Central Arizona Project canal and the 34,100 acre feet of water going to Navajo Generating Station annually with the electricity produced with our coal going to faraway cities.

Picture a beautiful suburb somewhere in Phoenix, Los Angeles, Las Vegas or Tucson replete with green lawns, swimming pools, street lights, beautiful air-conditioned homes, sidewalks and paved streets. Compare it with what we have on the Hopi and Navajo reservations. What a shocking disparity.

Hopi and Navajo leaders, please put aside your selfish mindset and listen to and work with those of your knowledgeable constituents. Put your best honest potentials in place and go after the corrupted organizations with true intent to help your people as you initially campaigned.