Tutuveni petroglyph area to be protected 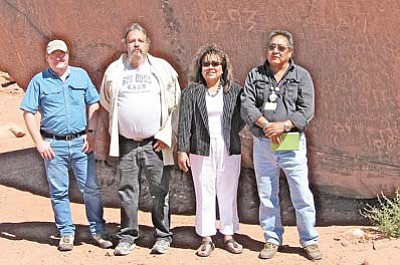 TUBA CITY, Ariz. - Recognized as a sacred site by the Hopi people, the Hopi "Tutuveni" petroglyph area located near Tuba City and state Highway 89 contains the largest, most significant concentration of Hopi clan symbols found anywhere in the American southwest.

It is now the focus of a joint tribal and Arizona Public Service (APS) community protection project.

With more than 200 line drawings and over 2,000 documented pictographs, the site - recognized as a traditional cultural property and recently nominated for "World Monument" status - has no public security provisions, which has made it a prime target of looting and irreparable vandalism since the late 1970s.

It was a large, two by two foot etching of the 2001 terrorist attacks on the World Trade Center by a random vandal now permanently etched in one of the larger rock formations that caused Leigh Kuwanwisiwma, Cultural Preservation Director for the Hopi Tribe, and Ron Maldonado, Supervisory Archaeologist for the Navajo Nation, to contact one another to see what they could do jointly to find some protection funding for the site.

Kuwanwisiwma and Maldonado both understood that some type of deterrent fencing would be essential; however, the other complication was that while the glyph site itself is historically Hopi, the site has been re-labeled as Navajo-owned property located within Navajo tribal jurisdiction as a result of 50-year land dispute litigation between the two tribes.

Despite this, the two tribal entities worked together to pass an "Intergovernmental Agreement" to establish a mutually beneficial partnership that would locate funding sources for protective measures.

This agreement was signed in 2006 by Navajo Nation President Joe Shirley Jr. and then Hopi Vice Chairman Todd Honyaoma.

The Tutuveni site is considered significant since Hopis have inhabited their home reservation area for over 1,000 years. Further, unlike other western religions, which are not dependent on location and can occur anywhere, Hopis must complete certain rituals at specific places at certain designated times of the year.

The Tutuveni site contains the clan markings of Hopi male members who would make the annual salt pilgrimage to the Grand Canyon, which took place immediately after the Hopi men's society initiation. The last Hopi salt pilgrimage was in 1904. Along the salt trail, there are 36 ceremonial shrines that end at the bottom of the Grand Canyon.

Tutuveni was an area where Hopis would camp and partake in ceremonial smoking and prayers before moving on. These petroglyph markings by the initiates who made the journey were part of the ritual.

Kuwanwisiwma turned to the National Historic Preservation Act as a strategy to protect this site. Once Tutuveni was established as a major traditional cultural property, which means that this historic site was extremely important in the maintenance and transmission of vital Hopi culture, he was able to partner with Maldonado.

Arizona Public Service (APS), which provides electricity to most of northern Arizona, became aware of the site several years ago when their vegetation team was clearing areas for new transmission lines according to Alan Bunnell, APS Public Relations Officer.

"Given our long standing relationship with the Hopi and Navajo tribes, we thought it was a good opportunity to help preserve a very important cultural and archaeological landmark in our state. We are proud to be able to assist ... in this area and it also gave us a chance to further our relationship with both Hopi and Navajo. APS donated about $13,000 in fencing materials for this project because APS is interested in investing heavily into the communities we serve, through volunteerism, donations and in-kind services. We are committed to this community philosophy."

APS archaeologist Jon Shumaker, who has been working with Kuwanwisiwma and Maldonado, was at the site along with Navajo Nation representative Cora Maxx-Phillips, and governor of Upper Moencopi, William Charley.

Maxx-Phillips stated, "These Hopi petroglyphs are keepers of history. They are examples of what links us to our Native past. I am very privileged to be able to work with the Hopi Tribe and APS in this joint protection project for the rock art history site. These Tutuveni rocks through our joint-tribal IGA which is an important working document, shows that these kind of partnership relationships need to be nurtured and more of these mutually beneficial projects need to be considered. The Office of the Navajo Nation President supports the cultural and historical preservation of all tribal sacred sites."

Shumaker added, "APS is working daily to preserve and protect sites that are considered significant in Arizona. APS understands the idea of cultural resource protection on all tribal lands. We have over 5,000 miles of transmission lines across the state and APS understands that these sites are not just important to tribes but to all Arizonans to protect their state history. We have had the opportunity to assist Hopi and Navajo in protecting this significant site and we are honored to help them with the fencing project here in Tuba City."

The fencing project is due for completion within the next 30 days.