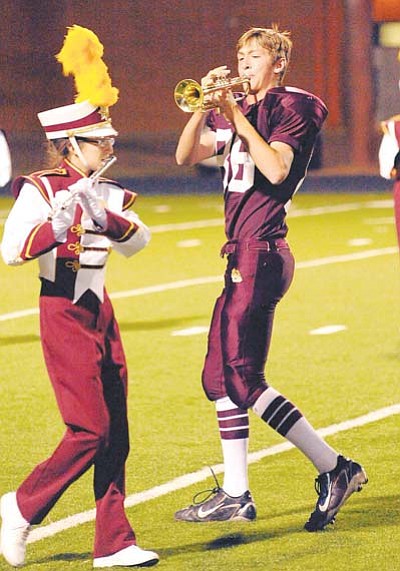 WINSLOW, Ariz. - The Winslow Bulldogs defeated the Ganado Hornets 48-6 in a 3A North Region football game played in Winslow on Friday. The win improved Winslow's record to 2-2 for the season but improved their important regional record to 2-0. Ganado fell to 1-2 for the season and 0-1 in the region.

The Bulldogs used a strong second quarter to build a 35-0 lead by the intermission. Ganado played much better in the second half and actually had the ball for much more time than the Bulldogs in that half. Despite controlling the clock the Hornets were outscored 13-6 in the second half.

Winslow scored the only first quarter touchdown on a 57 yard pass from Payden Zufelt to Jevon Estelle with over nine minutes left in the period. Josh Cirre booted the conversion for a 7-0 lead and that was still the margin entering the second quarter.

Wendell Carter, who had an apparent touchdown run negated by a penalty late in the first quarter, got into the Ganado end zone three times in the second quarter as he scored on a seven yard run within the first minute of the period. Cirre's conversion increased the lead to 14-0. Carter scored again on a 46 yard run with 7:11 left in the quarter and the conversion increased the lead to 21-0.

The Bulldogs blocked a Ganado punt, which James Martinez returned 17 yards for a score. The conversion put the margin at 28-0. Carter completed the first half scoring with half a minute left on a 16-yard run that made the half time score 35-0 after the conversion.

Ganado controlled the ball on an opening drive that took over seven minutes off the clock and scored on a 37-yard pass from Tommie Dennison to Benton Begay. The conversion attempt failed and Winslow led 35-6.

Winslow scored the only other points of the third quarter on an eight yard run by Dakota Prine. The kick failed and the Bulldogs led 41-6 after three quarters of play.

The only score of the final period was a 10-yard pass from James Martinez to Jamal Spencer. The conversion put the 48-6 final score on the scoreboard.

The Bulldogs will meet the Chinle Wildcats at Chinle on Friday in another 3A North Region contest.  Chinle had won its first three non-regional games 44-0 over 2A North Many Farms,