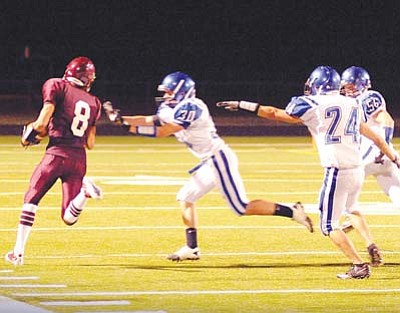 <i>Todd Roth/NHO</i><br> A Winslow Bulldog player runs past several Snowflake defenders during non-regional action last Friday night in Winslow. The Bulldogs were defeated 29-14, but are still 1-0 in the 3A North Region. The Bulldogs will host 3A North rival Ganado Hornets on Friday.

WINSLOW, Ariz. - The Snowflake Lobos defeated the Winslow Bulldogs 29-14 in a non-regional football game played in Winslow on Friday. The win was Snowflake's third in a row to start their first season under new Coach Ron Tenny. Winslow fell to 1-2 for the season but is 1-0 in the 3A North Region and has played competitively against a pair of 3A East Region powers.

The Lobos scored in the opening seconds of the second quarter on a 25 yard pass from Reddick to Johnson. The conversion failed and Snowflake led 16-0.

Wendell Carter got Winslow on the board with a 44 yard touchdown run with 3:38 remaining in the half. Payden Zufelt ran for the two point conversion that ended the first half scoring with the Bulldogs having pulled within eight at 16-8.

After Zufelt hit a fourth and 15 pass on the Lobo one yard line, Carter scored his second touchdown of the night on a one yard plunge. The two point conversion run failed but the Snowflake lead was only two points at

16-14, which was still the score as the third period ended.

Snowflake got some breathing room with just under 10 minutes left in the final period when Ammon McKinley ran six yards to score and Reddick booted the extra point to increase the lead to 23-14. The final score of the game came on a 14 yard run by Brit Smith. The conversion pass failed and the 29-17 final score was on the scoreboard.

The no huddle offense was effective for the Lobos who looked like a playoff team. Snowflake will journey to Globe on Friday for another non-regional game with the Tigers before their first most important and challenging 3A East Region contest at home against the Blue Ridge Yellowjackets.

Winslow will host the Ganado Hornets on Friday in their second 3A North Region game of the year. Ganado was idle on Friday but will bring a 1-1 record against non-regional foes to Nasser Stadium. The Hornets lost to Canyon State and defeated Red Mesa in their first two outings against 2A opponents.