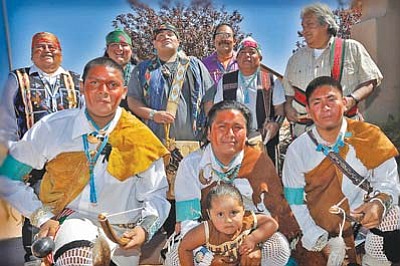 The Homolovi Dancers performed twice. The group included drummers and singers and a little girl named Aleighsna Nastico. Aleighsna is about 4-years-old and performed beautifully in all dances. She was the biggest hit of the performance.

The pottery-making demonstration given by cousins Dee and Gwenn Setalla explained how they make pottery in the traditional way. Samples of the clay and the soil from which it originated were shown. Also shown were the tools and paint used in Hopi traditional pottery.

As explained in Dee's biography, "Dee's pottery is made using the traditional Hopi coiling method. Clay is dug near his home on the Hopi Reservation screened and dried. The coils are carefully applied, smoothed and thinned as the pot takes shape. After the pot has dried, a stone is used to polish the surface. The pot is now ready to be painted freehand using yucca stem brushes and natural pigments. Firing the pot is done on the ground with sheep dung. Variations in temperature of the firing produce "blushes" on the pots. This is a sign that the pot was fired in a traditional ground fire."