Positivity in CCC 'State of the College' address 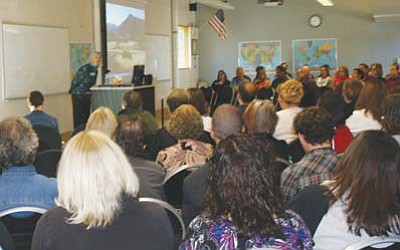 Bornstein opened by telling the audience that we are able to take a breath thanks in part to the cost cutting measures from CCC's Sustainable Financial Plan. She also wanted to take a moment to acknowledge how far CCC had come in the past 18 years, increasing enrollment 10 times since opening its doors in 1991.

Bornstein then stated that CCC has a long way to go to be truly sustainable, and that it would need everyone's support to continue to provide access and opportunity to the residents of Coconino County. This she said could only be done by taking a serious look at funding sources needed and to help it expand so it can serve the growing number of people seeking job skills and four year degrees through transfer programs in Coconino County.

Bornstein also pointed out that the District Governing Board had to increase tuition this year by $10 per credit hour to compensate for some of the funding cuts made by the state. It would require legislative action to change statute thereby allowing CCC to locally address the property tax issue. CCC currently has the lowest property tax allotment in the state and the lowest funding per full time student when equalization funds are figured into the funding equation. Equalization funds are uncapped funds that are provided to only four community college districts in the state - CCC is not one of the colleges receiving those funds.

Bornstein said, "We can be proud of the fact that we are likely the most efficient college in the state. However the bottom line is that this is about fairness and equality for all Arizona students."

Vice President of Business and Administrative Services, Jami Van Ess then elaborated on the Sustainable Financial Plan, reviewing eight areas that CCC department heads identified as places to cut or add revenue last year. All ideas were implemented, and she said that the process will be initiated again this fall to identify eight more, stating that the choices are going to get tougher as the options dwindle. Van Ess stated that the college is preparing for a scenario where there could very well be no state funding in the near future, saying that the good news is that CCC has a year to prepare, but state cuts coupled with the end of federal stimulus funds and the voter approved one cent sales tax, will force CCC to find more ways to meet budget challenges without impacting services.

Vice President of Academic Affairs Kathleen Corak next addressed the audience, reiterating the many successes that CCC has accomplished since its inception. Corak pointed out some key statistics showing that class sizes are growing and that major progress had been made both in arts and sciences and career and technical education in the area of class cancellations. In recent years cancellation rates were as high as 25, but now stand at around 5 percent for arts and sciences. Corak also pointed to the fact that Northern Arizona University changed the way it places individuals in developmental math and English classes, and that it had a direct impact on CCC, which has doubled developmental classes. This semester, CCC is offering 16 developmental math and six developmental English classes to meet the demand.

CCC will also be provide training to W.L. Gore in the area of anatomy and physiology, another first and another example of how CCC contributes to workforce development and the economic well-being of Coconino County.

Bornstein closed by announcing the receipt of a TRiO Grant worth nearly $1.5 million in federal funds over the next five years. The grant will give CCC an opportunity to provide additional services for first generation, low income and disabled students. Bornstein thanked the CCC employees for their commitment to students, positive attitude for the future of Coconino Community College, and outreach to Coconino County residents.