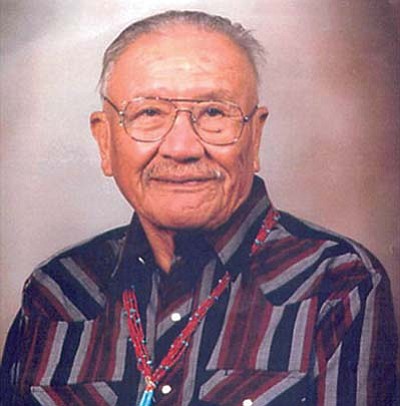 WINDOW ROCK, Ariz. - Last Friday, Navajo Nation President Joe Shirley Jr. ordered flags on the Navajo Nation to be flown at half-staff until sunset today in honor and recognition of the late Navajo Code Talker Allen Dale June, who died Sept. He was 91.

"The late Allen Dale June was renowned as one of the original 29 Navajo Code Talkers who served the United States of America, the U.S. Marine Corps, and the Navajo Nation during World War II with courage, honor and distinction," President Shirley said.

"Mr. June endured the horrors of combat on Guadalcanal and Iwo Jima as a radio operator in a forward echelon against hostile forces," he said. "The Navajo Nation unites and offers prayers and deepest condolences to his family during this time of grief."

Speaker Lawrence T. Morgan added, "The Navajo Nation lost a great warrior. It is a pleasure to know that we have warriors like Sgt. Allen Dale June, to serve and protect our freedom. His unique service to his country brought positive attention to the Navajo Nation. He will be missed. We are thankful for his years of service. Our prayers are with his family and friends."

June graduated in 1941 from the Tuba City Vocational High School in Tuba City. Upon hearing the news of the outbreak of World War II, he hitch-hiked to Fort Defiance on his way to Fort Wingate when he heard the announcement seeking Navajos who would become Code Talkers. He joined the U.S. Marines to become one of first 29 Navajos to compose the secret group that developed an unbreakable code.

He served from 1941 to 1945 and was honorably discharged with the rank of sergeant.

After his military service, June graduated from New Mexico Highlands University in Las Vegas, N.M., in 1952 with a bachelor's degree in business administration, accounting and economics. He went on to earn a master's degree from the University of Utah in 1975.

Although he spoke little about having been a Code Talker, in later life he always wore his red Navajo Code Talker cap with his name on it. In 2001, he was awarded the Congressional Gold Medal along with the other original Code Talkers for his pioneering Marine service.

June's funeral was held Wednesday, Sept. 15 at the Church of Jesus Christ of Latter Day Saints in Page. Burial will be at the family cemetery in Kaibeto.