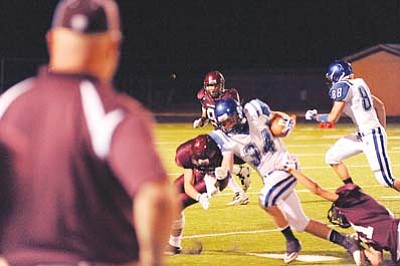 Six of the seven 3A North Region football teams will meet regional opponents on Friday. The only exception will be the Chinle Wildcats who will be at Show Low to meet the tough 3A East Region Cougars in what will undoubtedly be their most dangerous opponent to date.  The Wildcats defeated 2A North Region Red Mesa on Friday 24-6 to improve to 3-0 for the season.

Regional games include the Ganado Hornets at the Winslow Bulldogs. Ganado was idle on Friday while the Winslow Bulldogs were losing to the powerful 3A East Region Snowflake Lobos 29-14 at Winslow. The Bulldogs are 1-2 for the season but are 1-0 in the region with a win over Tuba City and have given 3A East Region powers Round Valley and Snowflake very competitive games. Ganado lost to 2A Canyon State and defeated 2A Red Mesa in their first two games and was idle on Friday. The Bulldogs are substantial favorites to increase their regional lead.

The Window Rock Scouts will host the Tuba City Warriors on Friday. The Warriors defeated the Alchesay Falcons of the 3A East Region on Friday to remain undefeated at 3-0 in non-regional play. Alchesay was the first 3A competition they had faced. Tuba City was idle on Friday but had lost its only non-regional game to 2A Hopi 40-14 and its only regional contest to Winslow 21-13.

The Monument Valley Mustangs will host the Holbrook Roadrunners in an important regional contest. The Mustangs met the 4A Page Sand Devils and lost 42-12 on Friday after defeating Red Mesa and Alchesay in their other non-regional games. Holbrook is 1-2 for the season but both of their losses were to powerful 3A East Region teams Snowflake 35-6 and Blue Ridge 48-0. Holbrook defeated Greyhills 56-6 in their non-regional opener.