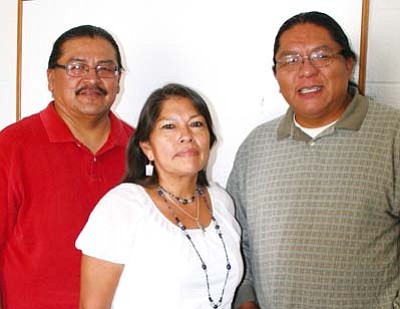 KYKOTSMOVI, Ariz. - The Hopi Substance Abuse Prevention Center (HSAPC), a project of The Hopi Foundation, proudly announces the addition of two new staff members. Kevin Nash is the new HSAPC Program Manager and Tyler Tawahongva is the new mentor. He joins a seasoned Mentor, Racheal Povatah. Both have begun their new jobs and the HSAPC team is once again fully staffed.

Nash is a member of the Tobacco Clan from the Village of Sichomovi. His prior work experience includes working as the Elderly Coordinator for Sichomovi where he learned more about working in the community and serving its members. His learning and understanding the dynamics of how a cycle of various activities can affect entire communities both inspired and motivated him to apply for the program manager position. He learned that all members of a community have value and contribute in their own unique way.

Asked why he chose to work at the HSAPC, Nash said, "For me it is more than a job, being clean and sober is a work in progress. When you are developing a relationship with a greater spirit you have to be very honest with yourself. I was told the truth will set you free and it has. Sobriety is a gift that is given to us all when we are ready to accept it. I was ready. I want to be there for the people who want sobriety so I can return the gift given to me."

Nash was also a Facilitator for Positive Leadership Practices with the Pioneer Hotel and Gambling Hall, coaching management and supervisory employees to learn problem solving techniques, providing skill building tools and improving communication skills. Currently, he is the Vice President of the Hopi Alliance Against Substance Abuse (HAASA) and a member of the Hopi Assisted Living Facility Task Team. Nash is also a Desert Storm/Gulf War Veteran and served as a U.S. Marine.

Tawahongva, from the Village of Hotevilla, is a member of the Coyote Clan and currently resides in Tuba City. He previously lived in Phoenix and worked for American Express in the credit card business division for 10 years. Returning to the Hopi Reservation in January, he has been involved with community work, newspaper reporting and involved in the parent group at Greyhills Academy High School where his daughter is a student.

If you are attending a community event, workshop, etc., you will most likely run into him for Tawahongva has an almost insatiable interest in the world around him. He says, "I am always out in the community. Since my return to Hopi, I made a commitment to help the Hopi community through my reporting and now through mentoring at the HSAPC. I see things in the community that can help people and I write about what I see. My direction is community-minded."

When asked why he chose to work at the HSAPC, Tawahongva replied, "I made a decision to come back home, get out of the city and the corporate world and get into the field of substance abuse prevention. I get to do what I want really want to do ... and not sit in a cubicle all day."

The service hours for HSAPC have also changed, and their hours have been extended from 8 a.m. to 5 p.m., Monday through Friday.

Plans are under way for a Fall HSAPC Open House. Everyone is invited to take this opportunity to meet the new staff members and reacquaint yourself with Racheal Povatah.

For additional information on HOPI Substance Abuse Prevention Center, services offered or to make an appointment, call (928) 734-0300 or