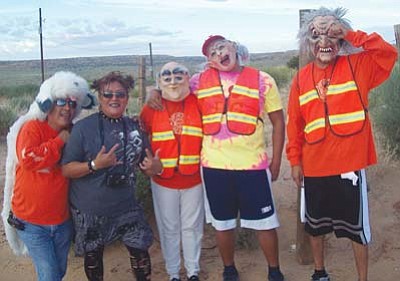 <i>Tyler Tawahongva/NHO</i><br> Hopi Health Promotions staff gets into the spirit of their final summer event, which had a Halloween theme. Staff say that having a theme keeps the events fun.

KYKOTSMOVI, Ariz. - On Aug. 27, the Hopi Special Diabetes Project (HDSP) held its final event for the 2010 season. People gathered at this Halloween-themed event to celebrate another successful season of staying fit and getting active.

According to Cassandra Yaiva from Health Promotions, there was one event held each week for a total of 16 events. A total of 1,568 people participated this year and at least 100 people reached the 100 mile mark. These people will be awarded with a surprise gift once all the miles are calculated. Some people were just over the 100 mile mark coming into the event.

Yaiva stated that they try to make this a fun event for the community and take away some of the competitiveness by attaching a theme to the event, such as the Halloween theme. Some of the participants came dressed in costumes and all the volunteers and workers were dressed up as well. Other themes included crazy hair, pink and cowboy themes.

For the most part, weather cooperated throughout the summer except for a couple events that had to be cancelled due to lightning and rain to ensure the safety of the participants. On the final day, there were some slight gusts but that didn't deter the participants from showing up to enjoy hamburgers and hot dogs after the event.

According to Yaiva, the biggest events are the kickoff event and the finale as well as the event in Moenkopi in conjunction with the Navajo Health Promotions where at least 600 people attended this year. She wanted to make special mention of all her staff as well as the CHR staff, Cancer Prevention, WIC and Wellness staff for all their hard work at each event.

Eventually, Health Promotions is hoping to have a "Biggest Loser" event over the next few months to keep people focused on healthy lifestyles. Diabetes Awareness Month will also include special activities for the community.

Joyce Hamilton, Director of Administration for the Hopi Disease Prevention Program, wanted to acknowledge that even though participation may have been down from previous years, she is happy to see everyone come out. Hamilton states that the 100 Mile Club helps people to start walking on their own even after the program is over and that is very encouraging. She has been part of the program from the beginning and her children have grown up with the program.

She looks forward to next year along with all the other participants.