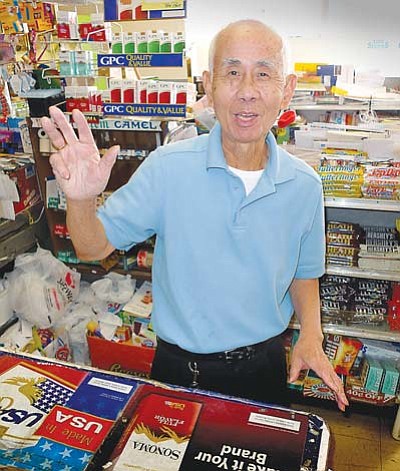 WINSLOW, Ariz. - In 1973, Ernie Seto came to Winslow and located his grocery store named Public Market on Second Street, across from what's now the La Posada Hotel. Seto and his wife Helen created the store.

They came from Superior where Ernie had worked at "Wings" grocery store for 20 years. At Wings, Ernie did just about everything, including cleaning, sweeping, stocking, clerking and meat preparation. Often his hours began at 9 in the morning and did not end until 1 a.m. the next morning.

The nearby copper mines had a large payroll and when the miners were ready to spend, the Wings Grocery Store was stocked and ready to sell, sometimes until 1 in the morning, if necessary.

In 1983, Ernie bought the bar next door and expanded his store. Then in 1985, Ernie bought the gas station across the street and opened Church's Chicken, which is still busy today. Ernie was active in Winslow Rotary for 18 years and was its president in 1989.

Ernie and Helen have five children who all graduated from Winslow High School and the University of Arizona. The present count is also nine grandchildren, of whom they are very proud.

Ernie commented that his Native American customers are what really sustained his business through the years.