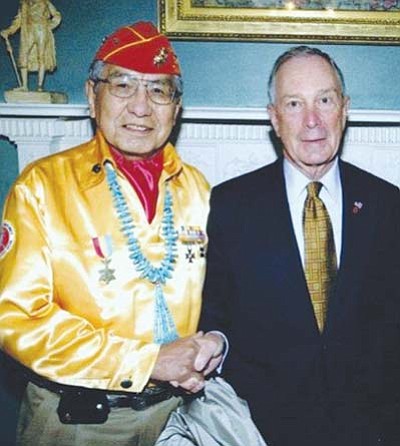 FLAGSTAFF, Ariz. - The Honorable Peter MacDonald Sr., a member of the famous Navajo Code Talkers, will be the guest speaker at the Marine Corps Birthday Ball this year in Flagstaff. The event is scheduled for Saturday, Nov. 6, from 6 to 10 p.m. and is sponsored by the San Francisco Peaks Detachment of the Marine Corps League.

MacDonald joined the Marines at 15 years of age in l944. After basic combat and communications training at the Marine Corps Base in Camp Pendleton, California, he was selected for the top secret Navajo Code Talkers School.

He served in the South Pacific in several combat zones with the First and Sixth Marine Divisions.

MacDonald will focus his presentation on the history of the Navajo Code Talkers and the role that they played in ending World War II in the Pacific.

The United States Marine Corps was founded, by a resolution of the Continental Congress, in the back room of Tun Tavern in Philadelphia, on Nov. 10, 1775. Since that time the Marines have distinguished themselves and built a proud tradition of military service to the nation.

The Marine Corps ball is an annual tradition celebrated by marines, their families and friends around the world.