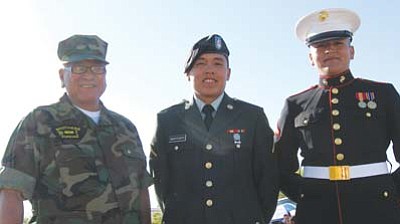 TUBA CITY, Ariz. - The Western Navajo Fair, the last fair of the season was a tremendous success, due in part to the good weather. Many activities occurred during the week from Yei Bei Chei dances to mud bogs to the rodeo and of course the parade on Saturday.

The theme of this year's parade was "Respect Mother Earth as we Respect Ourselves with Traditional and Modern Teachings." The parade had the usual assortments of royalty from throughout the Navajo Nation from as far away as Ramah, N.M. and the Apache Tribe. Being an election year, the parade also had politicians vying for votes in addition to cowboys, veterans and marching bands.

On Friday night was comedy night. The 49 Laughs Comedy Tour gave a performance to fund recognition events for the Tuba City Unified School District. Ernest Tsosie, Pax Harvey, James Junes, Tatanka Means and newcomer Adriana Chalepah performed for a very satisfied audience. Tatanka joked that what he thought was sexy was a woman making frybread and mimicked the actions. Pax Harvey made jokes about the Twilight series commenting "We don't have abs like that." Ernest Tsosie being sober for eight years joked that he no longer has to walk the lines for police and demonstrated. He commented later, "It is great to be Native and even greater to be a sober and drug free Native American."

James Junes echoed that sentiment being sober for 15 years saying, "You have the power to change and we have the power to overcome drugs and alcohol." Tatanka Means, son of actor and activist Russell Means says that he got his sense of humor from his mother and father who are pretty funny. He is coming out with a new movie Tiger Eyes with Judy Bloom shortly. Adrianna Chalepah, Kiowa, from Okalahoma is trying to make her way into the Native American comedy scene and looks forward to more shows.

One of the biggest draws is always the carnival where one can partake of all the fair food from corndogs to Navajo burgers to Navajo tacos. Of course the fair rides are a big draw for young and old alike. On the fairgrounds different events such as the powwow which showcased dancers from throughout the nation were going on. Another big event is the rodeo where the cowboys and cowgirls compete in roping and riding events.

The evening found country band Ace's Wild performing for fairgoers under the big tent. The next night the sounds of hip hop music could be heard coming from the tent. For mud bog enthusiasts, Bigfoot was in town to delight the crowd with its monstrous tires. Numerous bands were set up throughout the town to play for crowds in different places such as Kate's' Café, NTUA parking lot, El Gran parking lot so there was entertainment throughout the town.

Coinciding with the fair was the Tuuvi Days held by the Upper Village of Moenkopi where people enjoyed dances being performed and shopping at the numerous arts and crafts booths that were setup next to the Legacy Inn.

Each year the fair in Tuba City brings thousands of people to town and is good for the economy. However, one must be patient to get places due to the traffic, but its well worth the wait.