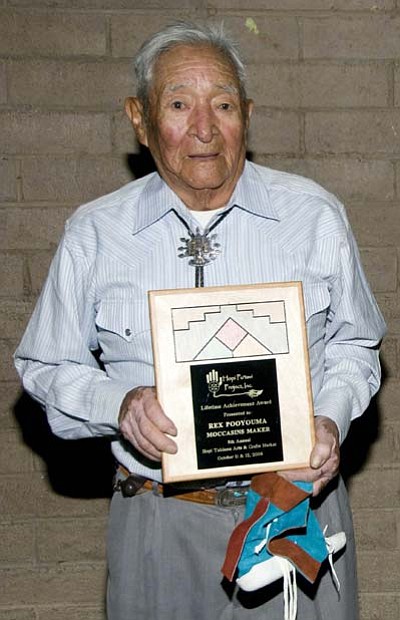 <i>Photo courtesy of Hopi Pu'tavi Project</i><br> Photo of Rex Pooyouma taken at the 2008 Tuhisma Art Market. Pooyouma was honored as an Elderly Artist well known for making Moccasins and was also recognized as a Hopi Code Talker.

KYKOTSMOVI, Ariz. - Hopi Tribal Chairman LeRoy N. Shingoitewa ordered flags on the Hopi Reservation to be flown at half-staff through Oct. 27 in recognition and honor of the late Hopi Code Talker Rex Pooyouma, 93, of Hotevilla, who died on Oct. 23.

Pooyouma, who was born on June 20, 1917, was identified as a Hopi Code Talker earlier this summer and was part of a secret Native American Code Talker Communications Network assigned to the 380th Bombardment Group, V Bomber Command, Fifth Air Force in the U.S. Army Air Force in the Pacific Region during World War II.

The Office of the Chairman and the Hopi Tribal Council was notified of Pooyouma's passing by Eugene Talas, director of the Office of Hopi Veterans Services.

"We are saddened to hear the news of the passing of one of our World War II veterans," Shingoitewa said. "In respect to his services to our great Nation and to the Hopi Tribe, the Hopi Tribal Council requested flags be flown at half-mast. We send our condolences and prayers to his family."

"It is with sadness that I inform you of the death of Mr. Rex Pooyouma in the early morning of Saturday, Oct. 23," Talas stated. "He was laid to rest later the same day at his home village of Hotevilla. We wish to extend our sincere sympathies and prayers to the family members on the passing of Pooyouma, who was a quiet and revered Hopi."

According to Talas, Pooyouma was the last of 10 Hopi Code Talkers who were credited for saving the lives of numerous soldiers by using their Hopi language to communicate secret-coded messages in combat. Their heroic actions and secret operations contributed to the final victory in the Pacific and eventually to the successful end of World War II.