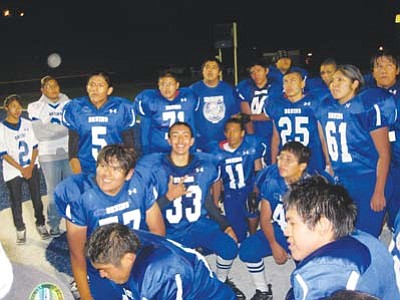 Hopi High beat Greyhills 13-8 as time ran out with Greyhills on the Hopi one-yard line.

Torres, a 17-year-old senior, said she was excited and happy about being elected homecoming queen.

"I never thought I would get it because I didn't think I was that popular," she said. "I was excited and nervous because I was never elected to anything before."

Torres said when they were announcing the winners she wanted them to hurry up because she wanted to know who won. Her parents, friends and teachers told her that they were proud of her. She faced five competitors for the crown.

"I thank my family for encouraging me and believing in me. I love you guys," she said.

Torres is active in the senior class and student council. She plays volleyball, basketball and softball. She maintains an A/B average. She plans to attend Scottsdale Community College and then Arizona State University to major in pre-med for either pediatrics or nursing. She is the daughter of Lucy Wytewa and Keith Torres of Bacavi.

Navakuku, a 17-year-old senior, was shocked he was elected homecoming king.

"I thought that Myles Thomas seemed like he was more the person that was going to get it," he said.

Getting the homecoming crown continues a great year for Navakuku as two weeks ago he was named Mr. Hopi High during Indian Week.

"This was harder because there was more competition for homecoming king," he said.

Navauku said this was also different because the Indian royalty decision was made by judges while this was voted on by his fellow students. He said his parents, friends and teachers congratulated him, but were just as shocked as he was that he won the crown.

"Some predicted that I would win, but I didn't believe them," he said. "When they were announcing the winners, I was nervous because I wanted to see who would win. It wasn't just about me."

Navakuku said he wanted to thank everybody who participated in homecoming events.

"Because it was the school's 25th anniversary, it was a win for the community, not just for the team," he said.

Navakuku is active in National Honor Society, student council and the senior class. He plays football, basketball and baseball. He maintains an A/B average. He plans to attend college in Kansas, but hasn't selected his major. He is the son of Eileen and Garlyn Navakuku of Polacca.

The family of the late Rydell Namoki donated $1,000 for a Hopi High scholarship and a Hopi flag to Hopi High School in Rydell's honor. The contribution was made by Lisa Honie, Rydell's mother; and his grandparents Raleigh Namoki Sr. and his wife Betty.

In the powder puff games, the seventh and eighth graders played to a 6-6 tie. The sophomores beat the freshman 12-0 and the juniors and seniors played to a 0-0 tie.

Monday was Gender Switch Day and drew a lot of laughs for the cross dressing.

The seventh graders, eighth graders and juniors tied for first place in the hall decoration contest.