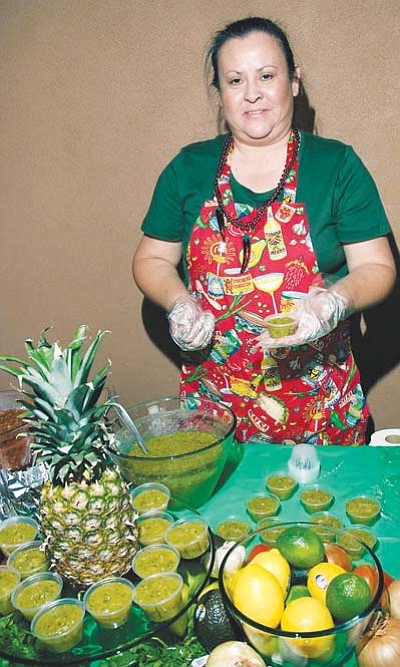 WINSLOW, Ariz. - PT's Bar and Patio sponsored a salsa competition and a jalapeño eating contest as part of the Winslow Salsa Festival on Oct. 16. The festival opened at 4 p.m. at which time the contestants could begin making their salsa. There were five categories in which to compete: Red, Green, Fruit, Pico de Gallo, and Guacamole.

The tasting competition began at 6:45 p.m. after the Winslow Mexican Ballet Folklorico Dance Troupe performed a variety of dances. The atmosphere was fitting as the festival was held on the patio, which has a fountain, a piñata which the kids smashed open, central courtyard open to the sky, lots of tables and chairs and a variety of covered areas.

Biale con DJ Birdie provided the music throughout the evening and Dustin Tucker, Mission Brand tortilla chips distributor, was also a sponsor of the event. Tom McCauley, PT's owner, was the major Fiesta honcho. The proceeds from the Salsa Festival were donated to the Winslow St. Vincent DePaul Food Bank.

This is an annual event in Winslow at PT's, so be sure to be here next year for tasting and voting of the salsa contestants.