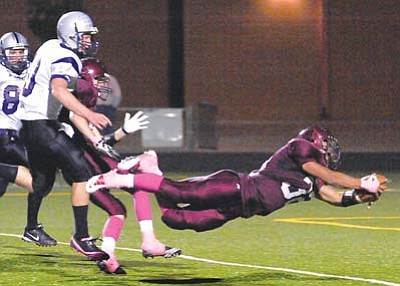 <i>Todd Roth/NHO</i><br> TOUCHDOWN: A Winslow Bulldog player dives in for a score. The Bulldogs, who won 48-0, wore pink in honor of National Breast Cancer Awareness Month.

WINSLOW, Ariz. - The Winslow Bulldogs defeated the Sedona Red Rock Scorpions 48-0 in a non-regional football game played in Winslow on Friday. The win improved Winslow's record to 6-2 for the season. The Bulldogs are leading the 3A North Region with a perfect 5-0 record. The outmanned Scorpions fell to 0-8.

The Bulldogs were devastating on offense as they scored on every possession until they had a 48-0 lead and started attempting field goal in order to hold down the score. Wendell Carter had another brilliant rushing night as he scored four touchdowns and two two point conversions for 28 points.

Sedona actually had some success running the ball in the first quarter that saw Winslow only run less than half a dozen plays. Kraig Shirley, though, scored on an 81 yard punt return the first time the Bulldogs touched the football. The conversion failed and Winslow led 6-0.  The next time the Bulldogs had the ball Shirley hit Bubba Cuellar for an apparent 61 yard touchdown pass which was nullified by a penalty. Wendell Carter dashed 67 yards on the next play and added a two point conversion for a 14-0 lead. That was the score at the end of the first quarter.

Carter ran five yards to complete a 45 yard drive and score the first touchdown of the second quarter. Aaron Martin converted for a 21-0 Bulldog lead. Then next time the Bulldogs had the ball Carter ran in for a score. The conversion kick was blocked leaving Winslow with a 27-0 lead.

Carter scored his fourth touchdown quickly at the start of the second half on a 72 yard run, then ran for the two point conversion and a 42-0 lead.  The 42 point lead made the rest of the game be played with a running clock as long as Sedona did not score and cut the margin under the 42 point standard.

Shirley ran for 34 yards and a touchdown that extended the lead to the eventual final score of 48-0. Winslow did try a 30 yard field goal near the end of the third quarter and a 27 yard attempt in the fourth quarter after they had scored on every possession  prior to those attempts that kept the score under 50 points.

Winslow has a tougher game slated for Friday against the 4A Coconino Panthers in Flagstaff. Coconino was 2-4 going into Friday's game with Page at Flagstaff.  The Panthers and the Bulldogs have had no common opponents. When Winslow and Coconino were in the same conference years ago, some of the most memorable games of that area were between those two teams.