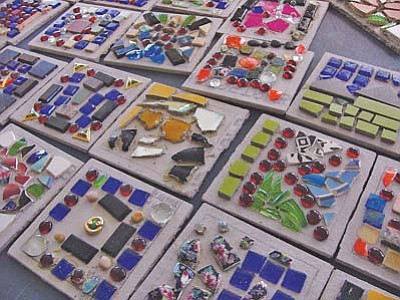 <i>S.W. Benally/NHO</i><br> Preliminary layout of mosaic tiles made by STAR students await gluing. The tiles will be grouted and put in place; the project is expected to be completed by Thanksgiving.

FLAGSTAFF, Ariz. - Juanita Hull-Carlson has done more than her fair share in leaving a permanent handprint on the landscape of Arizona. A master sculptor and art teacher, Carlson has led Arizona students both on and off the reservation in the creation of large, often functional, art projects, most of which have carried strong messages.

Carlson, who is funded through the Arizona Commission on the Arts, has returned to the STAR School to complete a project begun six years earlier - the creation of cement and found object mosaics to cover the walls of a three-tiered amphitheater.

Flipping through Carlson's portfolio, one cannot help but notice that much of the driving force behind her art is a strong environmental theme.

"This is my reason for being," Carlson said with a charismatic grin. "It's my mission to save the world from the humans."

Carlson met Dr. Mark Sorensen and his wife, Kate, at a "radical art event in the desert," and the co-founders of the STAR School were impressed enough to bring Carlson to the school for her initial visit.

This fall, thanks to the grant, Carlson returned to complete the work, the scope of which Sorensen feels is better developed thanks to the hiatus.

Sorensen, who directs the STAR School, said that he first conceived the project during one of the customary Monday morning gatherings in the school amphitheater. The gathering welcomes all of the students and staff back to the school for another week of work and provides a forum for announcements, entertainment and other activities.

"I visualize this gathering as an exercise in kinship," Sorensen said. "I thought that if we are going to practice kinship - something we utilize here at STAR and have found that this approach makes for less bullying and more friendliness among our kids and staff-a project like this would be valuable. We want our kids to have a strong sense of their clans and the interrelatedness, but also the stories behind the clans."

The students were asked to research their clans with their families and come back with their story. The kids also had access to books in the schools Native American Literature Library collection.

"Of course there was no way to put all of the clans into this project," Sorensen said. "The clans are broken down into nine major clan families, with one clan identified as the root clan."

Preschool students are also contributing to the project, Sorensen continued, explaining that each child has pressed their handprints into cement forms to be added to the bench project.

"That's their presence," Sorensen explained. "There is this idea that the art the kids produce about clans can be a welcoming presence in the future."

"Kids love to smash stuff," Carlson said. "This is a concept present in some world religions, the idea of creation paired with destruction. There is no space in our society for destruction; the breaking of the glass and tiles for this work provides that."

Carlson, who earned her Master's Degree in clay after 10 years of teaching, said that her movement to cement was her husband's idea.

"I love clay, I do," Carlson said. "It is elemental. Humans have dug in the earth and fired pottery in the ground for thousands of years. That's what attracted me to clay. But I got frustrated.

"With clay, there are just too many chances for failure, especially in teaching situations," Carlson said.

She still remembers her first failure with clay.

"I was in high school," Carlson said. "The pot next to mine blew up in the firing and the pieces attached to my pot. My pot didn't break, but I had to file the pieces off and it left a bald spot [in the glazing]. I was angry and sad."

Carlson said she had reached a point where she was attempting bigger and bigger pieces, and suffering failure after failure - her husband looked at her after one such failure and said, "Why don't you try cement?"

"Cement is immediate; it doesn't take the energy to fire. You can work bigger and stay outside all year round," Carlson explained.

Flipping through her portfolio, Carlson displays several "art cars," where actual running vehicles are decorated by artists-Carlson's philosophy of reduce, reuse and recycle made the concept a natural canvas for her work. One old car was decorated on-site at an Earth Day celebration in Prescott and raffled off as a fundraiser for Tsunami victims.

Questioned about the success of the effort, Carlson laughed delightedly.

"It was a terrible idea," Carlson said. "We didn't make very much money even though it seemed like a good idea. Art cars are not a commodity ... people know about; a luxury people don't even know exists."

A second art car was sold to a 75-year-old man who lives in Carlson's community. The gentleman stopped to look at a minivan that Carlson had sold earlier that day, and she offered the art car, suggesting he take it for a test drive, even though there were 220,000 miles on it and it needed work.

"When he got back, he announced that he would take it," Carlson said. "He told me that when he was driving it, people would wave and smile at him, and he loved that."

Asked about her desire to work with children, Carlson admitted that she and her husband were childless by choice.

"As an artist, I don't make a big pile of money," Carlson said. "Children are expensive. Through my work I can get my kid fix. I can play with them and leave. They never follow me home; I don't have to clean up after them. I love it," she concluded.