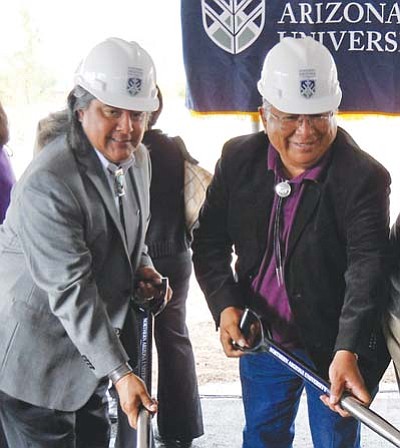 <i>Rosanda Suetopka Thayer/NHO</i><br> Dr. Lomayumptewa Ishii, department chair of the AIS program at NAU, stands next to Robert Lomadafkie, current resident Hopi elder, who will assist with academic guidance and mentoring through new programs that will be offered at the new AIS Native Cultural Center.

FLAGSTAFF, Ariz. - Blessed by a morning rain shower, the official ground breaking for a new $7 million dollar Native American Cultural Center was celebrated by members of the Arizona Board of Regents, NAU President John Haeger, tribal and city officials and dozens of Native students who are currently enrolled at the NAU campus.

The new building, which will cost $7 million by the time of its completion, will be built on NAU's campus directly across from the Cline Library, to the immediate left front of the Student Union. About $3 million was funded with private donations including an extremely generous $2 million donation from the San Manuel Band of Mission Indians, whose reservation is located in Highland, Calif.

The San Manuel Band of Mission Indians is a federally recognized tribe established in 1891. They are a highly visible gaming reservation who have frequently donated large sums of money to positive Native community public works, such as the purchase of the $1 million, five-acre parcel of land that the Extreme Makeover "Lori Piestewa" home in east Flagstaff was built on, over five years ago.

Valbuena stated, "Part of the reason that San Manuel gave the money to this outstanding project and building for NAU is because of the Native graduation statistics. We knew we made a good choice in a private donation towards this new, beautiful Native focused building that will serve the over 60 tribes of students that are enrolled here. We knew we could help make the world a better place for our Native children by giving financial support to NAU for this Native Cultural Center. We at San Manuel, offer our congratulations to all of you here at NAU, which includes all the tribes locally who have students attending this institution."

Home to 1,400 Native students according to NAU's Office of Public Affairs, the new building will house the Applied Indigenous Studies program, which is chaired by associate professor Dr. Lomayumptewa Ishii (Hopi).

Robert Lomadafkie, is another Hopi tribal member who serves as a half-time "resident elder," but with the new department and new building, staff hours will also increase and become more accommodating in servicing its Native student enrollees.

The facility will house activities that support student recruitment, retention, serving as a point of contact for Native groups on campus and program involving NAU and neighboring tribes. The center will embody Native values and will highlight NAU's commitment to Native student development by integrating programs, and sustainable design principles.

Navajo Nation President Joe Shirley Jr. said, "This is a new day for Native students who are attending NAU. This is your home away from home for four years for undergrad, and for many others, another two years for graduate work. This dream, come true for many of us tribal representatives, has now come to fruition, I would really like to express my appreciation for this show of academic support on behalf of all the Native students here, to President Haegar and Vice Chairman Valbuena of San Manuel. I feel honored to be here to witness this groundbreaking."

Hopi Tribal Chairman Leroy Shingoitewa stated, "I want to thank each of you on behalf of our Hopi students at NAU and our Hopi people as a tribe. I've been waiting 42 years for this day. I graduated in 1969 from NAU as a Lumberjack and this has been a long time coming. I can remember when Dr. Don Chase was our advisor to our NAU Native American Club and we used to meet in that old two story building over there. It makes my heart happy to know that this building will be here to support our Hopi and other Native students to give them the encouragement and assistance that you need when you're away from home. I feel very blessed today and hope that each of you will be happy and joyful for our Native students who will benefit from this new center."

White Mountain Apache Chairman Ronnie Lupe said, " I am so proud and honored today that we are breaking ground on this building. There are over 20 federally recognized tribes in Arizona today and I want everyone in this nation to know that Native people have contributed to the advancement of all American people, and that we have contributed to the progress of our historic America. I am proud to be identified as one of these Native people, the original people, the Native American people. This is the land of the Big Sky and I want to say to each of the Native students who are here today to witness this groundbreaking, 'Look up, it is the Big Sky, dream big, why not? The sky is the limit.' I am honored to be here to see this."

Jane Kuhn, Associate Vice president for Enrollment Management/Student Affairs, said that NAU has a commitment to serving Native students. She told the crowd that the new center will allow for more intensive advising that will help graduate and maintain Native students.

Construction of the center will begin this fall with a grand opening slated for Fall 2011.