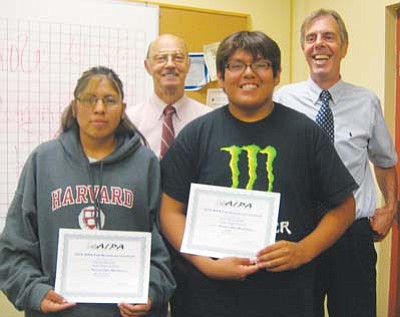 The winners in the radio broadcast division included:

Honyaktewa also earned an "excellent" for her feature story about "sexting problems."

• Donna Brooks -honorable mention for her sportscast about Hopi High track and field.

• Gerri Sehongva - honorable mention for her feature story about "Bullying can lead to suicide."

The winners in the journalism division included:

• Ray Antone - honorable mention for her feature about "Yaiva urges students to get involved.

Hopi High broadcast radio has won 78 state awards in the past three years.

Stan Bindell, radio broadcast and journalism teacher said the awards were great for the students and for the Hopi High media program.

"I'm proud of the radio and journalism students. They deserve a lot of praise for their accomplishments. We're going to work even harder to win more and higher awards," he said.

Bindell noted that several of the students who won awards graduated last year and he hopes that this year's students will win more awards in the spring competition.

Sahneyah, a junior, said he was excited about winning the award because he didn't think he would get it.

"I think it was awesome that my classmates won awards. They earned it," he said.

Hopi High performs the Hopi High Teen Show on Tuesdays on KUYI, 88.1 FM. It is the only live remote Native American teen talk show in the nation.

"I love the Hopi High teen show because it gives teens a chance to actually get to interview and work on the radio," Sahneyah said.

Brooks, a junior, said she was amazed and shocked about winning the state award.

"I will do my best this year for the radio program," she said.

Brooks plans to volunteer some of her time at KUYI, the Hopi community radio station.

She said the best part of the Hopi High teen show is learning how to operate the equipment.

She plans to major in criminal justice at either Duke, Stanford or Utah Valley University.

Honawa, a senior, said she was shocked about winning the state award because this is her third year in radio and the first time she won an award. Now, she is considering going to college to major in radio at Arizona State University or IAIA in New Mexico for creative writing.

"I'm happy that my classmates won awards. I want to tell them: Congratulations," she said.

Honawa said she likes the Hopi High teen show because "I like to hear my voice."

Bindell and the students thank KUYI for helping with training and equipment. They also thank the Hopi High School administration and governing board for supplying funding and time for broadcast radio and journalism.

The Hopi High radio broadcast students also call in news briefs to KINO in Winslow and thank KINO for giving them air time.