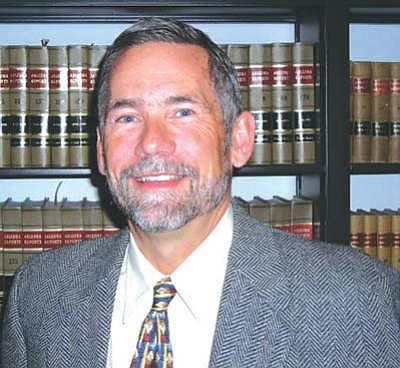 FLAGSTAFF, Ariz. - Long before he was the county attorney, David Rozema was in love with Coconino County and in full possession of the desire to make a difference.

Rozema is dedicated to keeping it that way.

One way he does so is by traveling across the county, erasing graffiti - both on and off the reservation.

"It's fun to do graffiti work with kids," Rozema said. "It gives their spirits a boost to be able to erase graffiti-and what it represents."

Researchers tell us that graffiti has been a part of urban life since the 1960s, but in reality, graffiti has been around for a long, long time. Remember those cave paintings in France of the bison and other animals? Perhaps that was the first effort of human beings to communicate with one another.

Graffiti is considered a way for gangs to communicate -and police recognize its appearance as one of the first signs that gangs are moving into a community or neighborhood. Investigators take careful note of graffiti - which helps determine gang affiliation, and sometimes membership information, as "artists" often sign their work with their gang name.

Others consider graffiti an art form, although developing recognition has been a challenge. One reason is because graffiti is considered an eyesore at best. According to Rozema, graffiti is vandalism, but admits that 80 percent of "tagging" is not gang-related.

Some may see the effort to paint over graffiti as a waste of time and resources, and Rozema is realistic.

"We know that graffiti will come back," he said. "But studies have shown that if you keep knocking it down, it will go away. We would like to see kids follow behind us and create murals. We have found that it is unusual to see graffiti placed over culturally significant murals."

Rozema has also been a driving figure in the fight against meth.

"We have a serious meth problem - it keeps us busy," Rozema admitted. "Recently we participated in a successful drug sting on the rez and in Flagstaff, and 26 drug dealers have been arrested."

Rozema is one of the founding members of the Western Navajo-Hopi Methamphetamine Task Force, formed out of the recognition that the meth problem is out of control.

"We got serious about fighting back and four and a half years later, we've made a difference," he said.

"We have special characteristics," Rozema said. "We keep it simple; very informal. We have lunch meetings at the courthouse in Tuba City, and serve the western region.

"We take on small projects, and don't bite off more than we can chew," he continued. "We make our decisions by consensus and talk about ways to spend our resources and our time."

Though task force members are volunteers, they have been able to raise money, including some donations from the Metro Board's work of forfeiture of cars and money from drug dealers.

Though Rozema and his many community partners have made a difference, it is clear that getting out in the fresh air and erasing graffiti is something he truly loves.

Rozema and his team have made a very visible appearance in reservation communities like Bodaway Gap, Cedar Ridge, Tolani Lake and Leupp. But he sometimes worries about local youth and their mentors who help undo the damage done by gang members.

"Doing this work is a little creepy sometimes," Rozema admitted. "There is the fear of retaliation. We spray like crazy and then we go home. Others [who have helped cover the graffiti] stay behind. This work takes courage, and we tell people, 'Be careful, but stick together to fight this -it is a war.'"

Rozema has also involved students from various communities who have been sentenced to community service in the removal effort.

Surprisingly, Rozema - who is an attorney after all - reported that one of the steps to graffiti removal is the seeking of legal permission to remove it.

"The Navajo Tribal Utilities Authority has given us permission to paint the water tanks," Rozema said. "But there are some areas where we leave it alone if we don't have that legal authority."

One such area is the state road signs and mile markers or private property.

Rozema will lead the attack against graffiti in the Cameron area this Friday, Oct. 15.

The Task Force will provide all the paint and necessary supplies. Contact Rozema at the Coconino County Attorney's Office at (928) 679-8200.