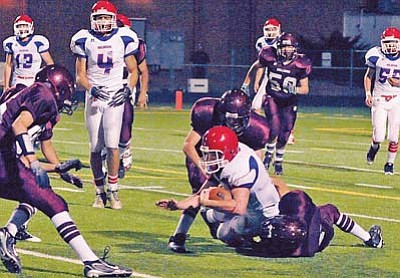 WINSLOW, Ariz. - The Winslow Bulldogs defeated the Holbrook Roadrunners 47-24 in a 3A North Region football game played on Friday.

The game was Winslow's Homecoming Game and the win improved their season record to 4-2 for the season and 4-0 in the region.  Holbrook suffered their first regional loss and left them a 2-1 record in the region and a 3-3 record for the season.

Both teams showed strong offenses and appear to likely finish first and second in the 3A North Region.

The Bulldogs scored first on a two yard run by Wendell Carter with just two minutes gone in the first quarter. Jevon Estelle's recovery of a Holbrook fumble at the Roadrunner 24 yard line had set up the score. Aaron Martin booted the conversion for a 7-0 Winslow lead.

James Martinez hit Kraig Shirley with a six yard pass with just under seven minutes left in the quarter and Winslow led 13-0 after the conversion failed. The game was the first appearance for Shirley since he suffered a broken collarbone in the controlled scrimmage at Show Low. He played much of the game as both a running back and as a defensive back.

The Roadrunners got on the scoreboard with still over five minutes remaining in the quarter on a 68 yard pass from Jalen Jackson to Ilacian Johnson. The conversion kick was blocked and Winslow led 13-6.

Jackson ran 36 yards to score with less than a minute left in the period to cut the lead to 13-12 but the conversion pass failed and the Bulldogs took that single point lead into the second quarter.

Carter ran 31 yards to score with only a minute and a half gone in the second quarter and also ran for the two point conversion to increase the Winslow lead to 21-12.

Martinez passed 62 yards to Bubba Cuellar with over nine minutes left in the half and Aaron Martin converted to increase the lead to 28-12.

Estelle ran 43 yards with four and a half minutes left in the half and Winslow led 24-12 as the conversion failed.

Holbrook ended the first half scoring on a 15 yard run by Jackson but the Bulldogs took a 34-18 lead to the locker room.

Carter broke a 53 yard run for his third touchdown of the game in the first two minutes of the third quarter. The conversion failed and Winslow led 40-18.

Estelle got his second touchdown of the night on a 92 yard run with just under five minutes left in the quarter. Josh Cirre converted to increase the lead to 47-18 which was still the score entering the final period.

The only score of the fourth quarter was on an 86 yard run by Jackson to cut the Winslow margin to 47-24 with just under two minutes left to play.