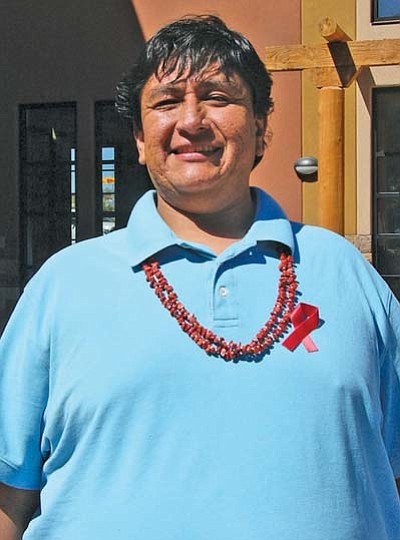 MOENKOPI, Ariz. - Char James is known by many names - including "Char the Meth Czar" and "Meth Mama." James currently works with the Navajo Treatment Center for Children and Families, but back in 2004, she worked with the Department of Behavioral Health and was one of many who were challenged to create meth task forces.

"Our division directors wanted to know why I was talking about meth," James said. "They told me, 'People up here tell us there's no meth; we don't know why you're running around talking about meth.' I told them to come down to the community level, it's there."

James was joined by Jeremy King, a community member, and Alberta Curley with the Navajo Nation Department of Behavioral Health as presenters at the Meth Does Not Discriminate Conference held by the Tuba City Regional Health Care Corporation (TCRHCC) and the Navajo Nation's Department of Behavior Health (NNDBH) at the Moenkopi Legacy Inn on Sept. 21.

James worked with medicine men to come up with a Navajo word for meth; they came up with bideezla' ats'iis yilgani - the drug that eats your body.

Armed with a word, James and others were able to explain to parents and grandparents what they were seeing in their own homes. James shared a story of a mother who was told by her son that the small glass pipes she found in his jeans were used to smoke mountain tobacco. Other pipes are made from the little vases found with a single rose at gas station check-out stands.

"Meth can be snorted, smoked or injected," James said. "It affects the central nervous system, damaging small blood vessels; it can cause a stroke."

"There are cases where babies have been born with their intestines outside of the body, or with the head and other body parts deteriorated," James said.

She explained that it was important to listen to young people, a lesson she learned the hard way.

"Some of our students don't hear messages of love and support," James said. "Some don't even know what 'precious children' means anymore.

"I feel I was the one who pushed him out," James said. "My work came first. I sat at 2 a.m. doing paperwork. Even when he wanted to talk to me, I'd say, 'wait, wait.' Soon he was out the door, out of the yard, over the hill, then in Phoenix. I started talking to him, and then it was too late. I had to reevaluate myself as a mother. Words have power. They can penetrate the heart like an arrow. Why didn't I listen to him?"

Jeremy King commands attention simply with his presence, despite his quiet nature. Maybe it is his size; maybe it's his direct energy. He is blunt in his introduction.

"I am an alcoholic and addict, four years into recovery," King said. "I am not a counselor. I am a full-blown addict.

"I had a $300-a-day habit; a person addicted to meth knows no boundaries. We lie, we steal, whatever it takes to get our fix," King said.

"[At one point] I stayed awake 17 straight days," King continued. "I hit the fan; it took five police officers to haul me out of my home, kicking and screaming."

King was placed in a padded cell for five days, where he hallucinated snakes in corners and a visit with a prosecutor before an actual meeting.

"I had a problem," King said. "If you can't admit you have a problem, you can't get well."

King credited his mother for getting him involved in helping others; she urged him to go to a meeting - and he decided to go. His pride was not at risk.

"Everyone in the community knows I have a problem," King said candidly. "People in Kykotsmovi probably talk about my problem. Three hundred dollars a day; how many cars do you think I could have had?

King admitted that he too had relapses, and it hasn't been easy, but involving himself with others has helped him. He is now involved with Hopis against Substance Abuse, is a chairperson of the Law and Order Committee, Hopis against Domestic Violence and other organizations. He also made a "conscious choice" to go to college and in two semesters will have achieved an Associates Degree in Behavioral Health.

"I started helping people. In my experience, addicts are just looking for someone to tell us we are going to be okay. You can't save every Tom, Dick and Jane, but you can take them by the hand, one addict to another, and say, 'Come hang out an hour or two and I can teach you a better way to live.'"

"No legislation or politician can tell me what the problem is. I tell them, walk the talk. Don't just sit there and say, 'We need to do this.' Get up and do it. Don't say we need money. There are people who will give time and money."

Alberta Curley works with the Navajo Nation Deparment of Behavioral Health, but she said that her story at the conference was one about change.

"We had dreams for our children, and one day that dream was shattered," Curley said. "My daughter was in her second semester of college when she tried meth. She stopped calling, got involved with a boy and got pregnant even though she was using."

Her grandson is fortunately doing well, and converses with his grandmother in Navajo. His father is in prison since 2003, however, but writes to his son telling him not to make the mistakes he himself made.

"We thought our daughter was out of the woods," James explained. "In 2005, I drove one of my sons to school, and when I got home the cops and the FBI were at my door. She was still using."

James described the heartbreak of seeing her daughter arrested and her grandchild crying, needing to be breastfed, and the "longest day" in Albuquerque the following day.

"My family came together that night," James said. "Now I ask myself, what do I need to do to be a better mother? How can I communicate?"

She advised parents to go home and hug their children.

"Sometimes we show love by buying them things," James admitted. "We thought we were showing them love by working to pay tuition.

"My daughter faces challenges every day. Now I listen. While I listen, I pray."

"The conference was a success if numbers are any indication," said Ruth Begay, MSPI Grant Coordinator, TCRHCC. "We stopped registration when we received 100 registration forms; we gave out 96 attendance certificates, and had participants from the Navajo, Hopi and Kaibab Paiute reservations."

Begay thanked TCRHCC and Tuba City DBHS for their part in making this conference a success. The next Meth Does Not Discriminate conference is scheduled for November.