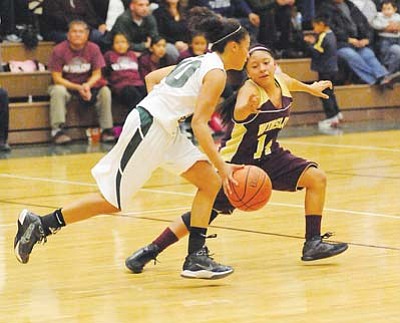 <i>Todd Roth/NHO</i><br> A Lady Bulldog defender attempts to take the ball away from a Flagstaff Lady Eagle player in a close season opening loss in Flagstaff.

In the boys' game the Flagstaff Eagles defeated the Bulldogs 67-61. The Eagles broke open a close game with a 24 point fourth quarter to come away with the victory.

The Eagles led by a narrow 15-13 margin after the first quarter but Winslow rallied and had a slim 30-28n advantage at the intermission. The Bulldogs led 45-43 after three quarters but the Eagles outscored them 24-16 in the final period to claim the victory.

Kraig Shirley paced the Bulldogs with 24 points and tied Flagstaff's leading scorer Cullum Long for game high honors. Tremayne Nez with 14 points and Tyler Williams with 12 were also in double figures for the Bulldogs. Levi Roberts with 16 points was also in double figures for the Eagles who had more players contribute to the scoring for their margin of victory. The Eagles had eight players score to only five for the Bulldogs. Most of the rest of the Eagles scored in the four or five point range.

The Bulldogs played in Snowflake on Tuesday and will make their first home appearance on Thursday, Friday and Saturday, Dec. 2, 3 and 4 when they host the Cake Chevrolet Shootout Tournament.

In the girls' game, the Flagstaff Lady Eagles defeated the Winslow Lady Bulldogs 52-44. Flagstaff built a comfortable lead in the first three quarters then withstood a furious fourth quarter Winslow rally to preserve the victory.

The Lady Eagles led 16-13 after the first quarter and had increased the margin to 33-21 by the intermission. The lead was still a comfortable 48-33 after three quarters but the Lady Bulldogs cut into that margin during the final period.

The Lady Bulldogs played at Snowflake on Tuesday, Nov. 30. They will be in Gallup, N.M. on Dec. 2, 3 and 4 for the Gallup Invitational Tournament and will not be at home until Wednesday, Dec. 8 when they host the Show Low Lady Cougars.