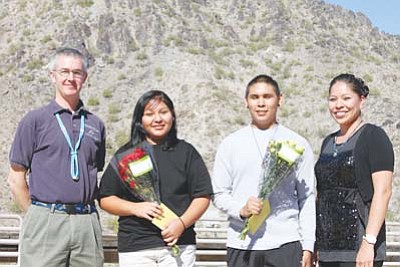 NANAF Executive Director Brian Buckley and Board Member Genevieve Bennally presented both Yowytewa and Yoiwaima with $1,000 scholarships. The pair are the first two students from the Hopi Tribe to receive scholarships from NANAF.

Yowytewa, from Hotevilla, will pursue her degree in nursing through Paradise Valley Community College. She is a member of the Bear Clan. She is the daughter of Amelia and Faron Yowytewa of Second Mesa and Hotevilla respectively.

Yoiwaima, from Polacca, will pursue his law enforcement/criminal justice degree from Central Arizona College. He is a member of the Coyote Clan. He is the son of Valentina Youvella and Darron Joseph, of Polacca and Second Mesa respectively.

In its five-year history, NANAF has granted nearly $20,000 in scholarships to Native-American high school students from tribes in the northern Arizona region.

For more information about donating to NANAF and applying for scholarships, visit www.tnanaf.org.