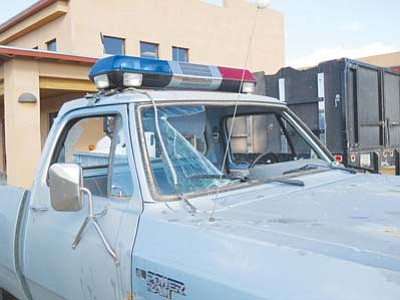 <i>Rosanda Suetopka Thayer/NHO</i><br> A total of three vehicles, including the one pictured above, were damaged during a recent vandalism spree at Hotevilla. Two of the vehicles belonged to the Hotevilla village administration and the other was a school vehicle parked at the Hotevilla-Bacavi Community School.

HOTEVILLA, Ariz. - This past weekend, extensive property damage occurred at several buildings in Hotevilla Village. There was extensive damage to several huge, double paneled solar windows in the Hotevilla Community Youth and Elderly Building as well as destroyed vehicle windows in two of the large heavy duty work trucks that belong to the village, a broken bathroom window at the Hotevilla post office, two broken classroom windows at the Hotevilla Bacavi Community School and window damage to a new government SUV parked on the HBCS campus.

While one of the persons responsible for the extensive damage to this community was tracked on foot to his home where he had been hiding, there was still concern echoed since the other suspect was still at large. The apprehended individual eventually confessed to the damages.

Officer Paul Sidney of the Hopi Tribal BIA Police was immediately on the scene and enlisted the help of local village workers who were on the scene assessing property damage and clean up.

This community assistance has prompted a heightened sense of danger and discussions of retaliation from the remaining person and his family members against anyone who might know of his whereabouts or who might aid in his apprehension.

In Webster's dictionary, the term "retaliation" is defined as "counteraction, counter-attack, counter-blow, reprisal, revenge, vengeance." Its meaning could easily compel a person not to tell or reveal a criminal act for fear that the person(s) responsible will come back and wreak havoc or do harm to whoever helps in finding them.

It is this very topic that has stopped many Hopi village community members from giving vital information that could lead to an arrest and possibly stopping some of this vicious public vandalism that has escalated in the past few years. With the added mix of drugs and alcohol, this makes the security portion of being a local law enforcement officer that much more dangerous.

However, letting these criminals know that this type of destruction, lack of respect and damage will not be tolerated is being discussed since this type of behavior is not in line with Hopi values, and that respect for property and possessions of others is a core principle in understanding the Hopi way of life.

Stealing firewood and coal has even become prevalent in many villages, causing many villagers to build large coal bins and put padlocks on them to prevent theft.

In the past few months, crimes have increased in the otherwise peaceful Hopi villages, but so many recent deaths of young male members as a result of guns, knives, drugs and alcohol are also resulting in some villages in considering the hiring of security personnel to patrol their villages and that more lighting be added to deter criminal activity.

This recent incident of vandalism has led to discussions of the lack of adequate personnel in the Hopi Police Department. Officers currently work 10-hour shifts, but are spread out over the entire Hopi Reservation area, making it virtually impossible for them to get to a crime if, for example, they are at Upper Moencopi and have to go all the way back to Keams Canyon. That trip would take over an hour and a half.

As a result, officers rely on having community members help them to find and track suspects, hopefully leading to an arrest based on reliable information that is provided.

According to an Arizona state bar attorney who is also a Hopi tribal member, "If you have been threatened by someone who has committed a crime for assisting in stopping criminal activity or for giving information about a crime that has occurred, you are advised to contact law enforcement and your village officials immediately. Do not attempt to negotiate or placate the intimidator. Attempting to coerce your silence or threaten you bodily harm or personal property damage is also a crime and is prosecutable by law."

Community members who help with catching the person at large should not have to worry whether this person will come back and harm them or their family members for assisting in tracking their criminal activity.

To date, the Hopi Tribe has not formally addressed these concerns within the villages, but it is an apparent problem that is escalating and becoming more widespread. It was expressed by Hotevilla community members that the Hopi Tribe's Law and Order Committee should develop some new laws to prosecute not only the criminal, but also family members or friends who try to cover up for and protect them.

This type of village and community vandalism is obviously something that merits substantive discussion with concrete solutions for local communities and villages to implement. Support must also be given to local Hopi tribal law enforcement to help catch these criminals and deter future vandalism activities within the Hopi Reservation area.