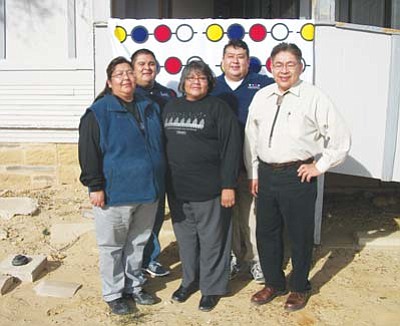 KYKOTSMOVI, Ariz. - The Hopi Education Endowment Fund (HEEF) celebrated its 10th anniversary this past month. HEEF is an organization established by the Hopi Tribal Council when Ordinance 54 was passed to establish a fund to help Hopi students pursuing post-secondary degrees. According to Executive Director LuAnn Leonard, "We were only hoping to get $1 million, but were awarded $10 million."

Since then due to a sound investment portfolio, the fund has grown to around $16 million, even after awarding $6 million in scholarships. According to Wayne Taylor, "In the past three to four years during the financial crisis, particularly 2007-2008, a lot of people lost half of their investments." Fortunately, HEEF managed to withstand the crisis.

Hopi Foundation Executive Director Barbara Poley, a founding member of the HEEF board, stated, "It was an honor to be invited to participate on the board. At the time I was developing my own organization, but when one spends so much time creating a new baby it is difficult to walk away from nurturing its growth from scratch."

Poley also stated that one of her proudest moments was hiring Luann Leonard as Executive Director. Leonard stated, "I came to realize the best thing for the new organization and the people was if we had one of our own - for Hopi, by Hopi - as the head, and the rest is history."

Taylor recalled, "We saw a lot of issues [12 years ago.] Students were going to school in spring and the council would still be deliberating on the budget and students couldn't pay for their books and tuition." This prompted Ordinance 54.

HEEF now is one of the most stable and enduring organizations of the Hopi Tribe and is meeting its first priority of ensuring college students are getting sufficient support. Taylor recalled a trip to Washington, D.C. He passed through the big cities and the many people living there. He saw the majestic buildings in Washington, D.C. and the military display of the might of the U.S. He realized that we have to live within the new world. This was, and still is one of the visions of HEEF to enable success and excellence. He is pleased with HEEF's progress in the last 10 years and envisions building a college on the Hopi Reservation someday.

Some of the highlights in the past 10 years that makes HEEF a unique organization is that it is one of the first of its kind in Indian Country and takes advantage of a special IRS code which recognizes the unique sovereign status of federally recognized tribes. HEEF has been recognized by prestigious organization as a model including Harvard University's Honoring Nations program. They have been asked to present at conferences and other tribes come to visit Hopi to learn about setting up their own endowment funds.

Another recent highlight is the establishment of a scholarship in conjunction with Arizona Public Service. According to Leonard, "Over the next four years, there is $90,0000 that will be awarded." The unique thing about this scholarship is that HEEF wrote into the scholarship that recipients must serve 40 hours of community service in their chosen career field. She says the goal is to bring students back and work for their own people where they are needed.

Leonard added, "Many times we are asked, 'how many students do we serve, where are they attending and do they come home after they finish their education?' Each student is an investment in the infrastructure of the Hopi people."

Throughout the year, HEEF holds different fundraising events such as an auction. However, this year, they will be holding a benefit sale in March at the Heard Museum where they will be selling Hopi art. Leonard states, "It's hard to give $500 but not as hard for Hopi artists to make things for $500 to donate to the sale."

HEEF is continually finding ways to raise funds and have worked with lawyers executing wills, individual donor corporations and the State of Arizona. Taylor added that the Board has embarked on a renewed fund raising campaign. The Hopi Tribal Council also has a vested interest through mining and land lease contracts to have some of these payments go towards education goals.

He stated, "We also need to help Hopis and friends of Hopis understand that if they are paying federal income tax that they can reduce their tax while at the same time help meet Hopis educational dreams by making tax deductible contributions to HEEF."

On Nov. 19, HEEF held an open house for the community to join in its celebration. Attendees were shown a movie that featured doctoral student Monica Kahe. Kahe's 5-year-old daughter mimics her mother by pretending to study and carrying a bag around. The film also showed the history of HEEF and past Board members and events.

Chief Loloma was featured in stating that we as Hopi need to learn to live in the this new culture. Education was previously out of reach of many Hopis, but with the work of HEEF, they look forward to making the educational dreams come true for Hopi students.