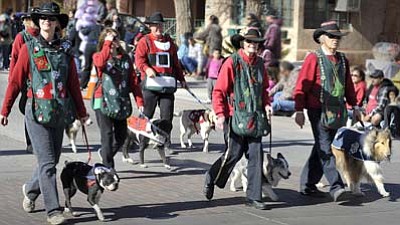 WINSLOW, Ariz. - The annual Winslow Christmas Parade was again a huge success. There were 63 entrants in this year's parade, including many from the Navajo and Hopi tribes. The parade, held Saturday, Nov. 20, started at 1 p.m. It headed East on Third Street and West on Second Street between Campbell and Colorado Avenues.

Despite the windy weather, the attendance was massive. A big thanks to the city of Winslow and the Winslow Chamber of Commerce for ensuring that Winslow residents were able to enjoy "A Picture Perfect Christmas."

The parade entrants competed for a variety of awards. Winners are listed below: