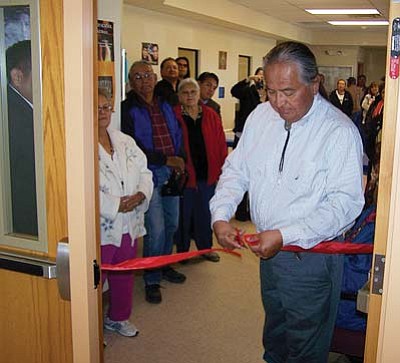 Judge Platero said that drinking and driving is not the Navajo way and that the court will be looking to work with the state of New Mexico in the fight against DUI.

The courtroom was dedicated to the community of Tohajiilee. The courtroom has been open but a dedication was never held until Nov. 18, Judge Platero said.

In his remarks, Delegate Platero recalled that the district court had previously been housed in a trailer. "Now look at the facility we have. It's one of the nicer facilities across the Navajo Nation that we are able to enjoy," he said.

Dan Moquin, staff attorney for the Alamo/To'hajiilee Judicial District, said that this project was one of his first assignments when he was hired.

The state nearly took funding back from the project in 2009, but the district court staff and Navajo Nation leadership were able to save it, he said.

Judge Platero said that the district court will now be able to build its technological infrastructure to provide services for the community. He also said one of the district court's plans is to start holding meetings with the elderly to update them on the laws.

"We're no longer going to be a closed door," Judge Platero said. "This building is just one example of the good things that are happening."

Judge Platero handed out certificates of appreciation to those whom were involved in the dedication ceremony and those whom were instrumental in completing the project. A special plaque was given to Larry Holman of To'hajiilee Community School for the school's partnership with the To'hajiilee court.