Out & About: Fall colors along Weatherford Trail 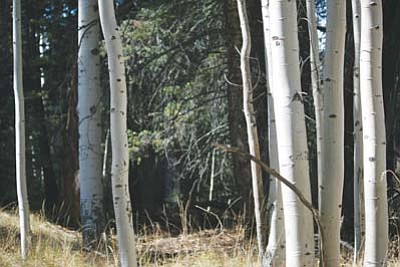 <i>Lisa Viotti/NHO</i><br> Nice view of evergreens beyond a small grove of aspens along Weatherford Trail.

FLAGSTAFF, Ariz. - The Weatherford Trail can be tough any time of year, but as the season turns colder it's even tougher to make the climb as the altitude can take hiker's breath away.

The fall colors that showed on the Weatherford Trail were also breathtaking before the cold took most of the colors away.

This trail has a general incline, which feels like it's about 100 feet more in altitude for each 10th of a mile gain. The trail is 8.9 miles roundtrip, but connects with several other trails for hikers who want to explore further. One of the best parts of this hike is the changing scenery due to the continual change in elevation.

The trail begins at about 8,800 feet and tops out at 12,030, which explains why the Flagstaff Hikes book rates the hike as "hard."

This alpine forest offers a lot of tree cover. The tree cover can be good to block the wind, but otherwise won't do much to keep hikers warm during the winter. The trail offers excellent views of mountains and trees. This trail connects with Kachina Trail as well as Doyle Saddle. There are plenty of aspens along this trail; sometimes it seems like an aspen forest while other times the aspens are sporadic.

The Weatherford Trail is historic as it was used as a private toll road in the 1920s. Further in the trail connects with the Inner Basin Trail and later joins the Humphreys Trail, which goes to the highest point in Arizona.

Various birds, including bluebirds and woodpeckers, were spotted along this trial. As recent as a couple weeks ago, some flowers remained.

There is no water along this trail so hikers will want to bring an ample amount. As it gets colder, there are also less people willing to take this trail.

Out and about: Flagstaff’s Weatherford Trail offers views topping off at 12,633 feet
Out & About: Kachina Trail
Out and about: See Canyon Trail
Kendrick Mountain Trail - It's all downhill from here
Houston Brothers Trail on Mogollon Rim a northern Arizona summer outdoor highlight
Contact Us
Submit Questions, Comments, or Story Ideas