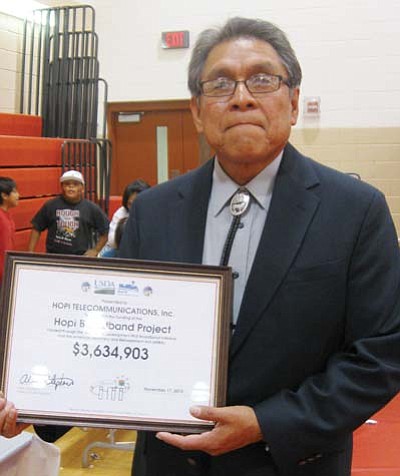 POLACCA, Ariz. - On Nov. 17 Hopi Telecom, Inc. held a customer appreciation event to thank the community for their continued support of Hopi Telecom, Inc. and to celebrate the acquisition of $3.6 million dollars in funds from the federal government.

Carroll Onsae, General Manager of Hopi Telecom, was proud to receive the funds.

"It will help build better fiber optics from Jeddito to Holbrook," said Onsae. "The current broadband is microwave, which has its limitations. The fiber optics will improve services to schools, hospitals, police and many services in the community."

"We hope to start installation in the second quarter of 2011. There are many formalities such as permits and right of ways to take care," said Onsae. "We have three years time to get it done."

Hopi Telecom is the sole provider of telecommunications service to the Hopi Reservation since its formation by the Hopi Tribal Council in 2002. Onsae has been General Manager since 2007. In places like Hotevilla where Internet and services are limited to outskirts of the village, Onsae said he is "Looking at wireless technology called Wymax technology, which provides bigger, more powerful telephone service."

Master of ceremonies Wayne Sekayumptewa works as a Central Office Technician. He is the one that is called when the lines go down or when there is a problem with the phone lines. He has worked for HTI for four years and he says the next phase "puts Hopi at the same level of telecommunications as bigger towns such as Flagstaff." Fiber optics opens the door to new technology such as IP, which is another way to provide phone service through a computer. The upgrade to system will offer more levels of service to customers such as different speeds of DSL as well.

The festivities included a jumping area for children as well as traditional dancing from local talent from Second Mesa. In attendance were members of the board who are made up of local as well as off reservation members. Board member Donny Manning came from Texas to attend the event. Representatives from local government officials were on hand to voice there support for HTI as well as the Chairman and Vice Chairman of the Hopi Tribe.

To finish the evening attendees were treated to dinner of hot dogs and hamburgers, as well as cake with the HTI logo.