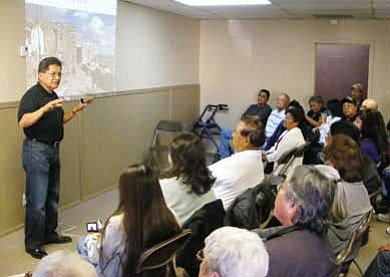 <i>Rosanda Suetopka Thayer/NHO</i><br> Former Hopi Chairman Ben Nuvamsa, served as one of the presenters to about 50 Hopi and Tewa tribal members regarding the new Hopi Constitution Draft No. 24 who have serious concerns about the draft proposal and would like to see the federal election on its passage halted.

FLAGSTAFF, Ariz. - There has never been a time in Hopi history that opposing political camps have worked together - albeit, in their own separate, individual ways - to help defeat a single initiative of the Hopi Tribe.

The focus of all this joint effort among three separate Hopi political camps is the newly proposed Hopi Constitution Draft No. 24A, which has recently been approved by the Bureau of Indian Affairs to go forward with a formal, federal election for possible approval by formal vote of Hopi and Tewa registered voting members in the next few months.

The new Draft No. 24A proposes to create a new "Fourth Branch" of the Hopi Tribe's central government. Currently there is only one branch of government and that is the Hopi Tribal Council.

The new draft would categorize four formal areas of Hopi government, Executive, Judicial and Legislative, with the new fourth branch as "Villages."

Under the new Draft 24A/Revised Constitution, that would place all 12 villages under a central government organization, all three of these separate political Hopi camps say violates Article III, Section 3 of the present Constitution and By-Laws of the Hopi Tribe where it stipulates, "Each Village shall decide for itself how it shall be organized."

The other issue is Draft No. 24A has been sitting on the tribal back shelf for seven years and was just recently dusted off by Hopi Chairman Leroy Shingoitewa and his Constitution Task Team in what is being called a "another Shingoitewa rush job approval." This is alarming the "Silent Majority" group and its organizers, such as Monica Kahe, Mary Felter, Dale Sinquah and Jerry Sekayumptewa and secondly, the traditional group represented by Ronald Wadsworth/Shungopavi Village along with their public relations spokesperson, Bertha Parker, and their political supporters.

And finally, the group of Hopis that are primarily from the Phoenix area and several other key Hopi political players including Larry Hamana, tribal advocate for off-reservation Hopis, former Hopi Tribal Chairmen Ben Nuvamsa and Vernon Masayesva, Hopi attorney and former Hopi Chief Judge Gary LaRance and their group of long time loyal supporters, who in the past year and a half, have been providing all public factual information on several key Hopi issues critical to the Hopi public, such as the carbon storage issue, Peabody negotiations, Little Colorado River information and Snowbowl concerns and now the new Draft 24A.

The meeting held in Flagstaff was historic in that there has never been one singular issue that has brought all of these differing Hopi factions to the same table with the one goal in mind: to defeat this new Draft No. 24A and stop the federal election process.

Fifty members of the Hopi tribe were present at the Flagstaff, Nov. 13 meeting. Those present at the end of the meeting, clearly understood that while they might not all agree on personal or political issues on their home reservation, they jointly agree that they do not want the passage of this new draft.

A formal press release issued on Oct. 31, 2010 by Ronald Wadsworth, Director of Hopi Nation Traditional Leadership, through Bertha Parker, who is serving as the Public Relations officer for their organization, sent a formal letter to Ken Salazar, Secretary of the Interior, to "halt the vote on changes to the Hopi Constitution and to deny the request by Chairman Leroy Shingoitewa hold a constitutional referendum and that Chairman Shingoitewa if allowed to have such a vote, would strip the traditional and religious leaders of the Hopi villages of their religious protection given to them by the current Hopi constitution."

The final draft proposal No. 24A has been criticized by all three of these Hopi political groups as being negotiated and created by Hopi Chairman Leroy Shingoitewa and his interim attorney Robert Lyttle and Western BIA Regional Office Director, Bryan Bowker of Phoenix accusing each of having their own personal political agendas in mind trying to rush this to a formal tribal vote by the Hopi/Tewa population to gain control over even the hold-out "traditional villages" that currently do not even participate in or recognize the Hopi Council.

In a power point presentation by LaRance and Nuvamsa at the Flagstaff meeting, the focus points given to the meeting attendees was to present the ramifications to the Hopi and Tewa people if a final "Fourth Branch" of government was allowed to be created in the new constitution.

This "Fourth Branch" of the Hopi tribal government would strip all 12 villages of their "inherent and reserved aboriginal sovereignties and powers that would result in being regulated by the Hopi central government."

The biggest danger in passing this new Draft No. 24A in its present form, for example, would result in having voters, let's say from Moencopi, Bacavi and Kykotsmovi, voting to have Shungopavi and Hotevilla come under the Fourth Branch only to be re-organized in another manner under central government laws, regulations, policies and procedures and other dictates while destroying the legal status of the village.

Another example is present Hopi constitutional law also applies to having the "consolidated villages of First Mesa" deciding among themselves whether they should remain three separate villages, with out any voter interference based on the proposed constitution. This would change if the new draft is approved.

Presently, Article III, Section 3 protects the inherent and reserved sovereignty and powers of all 12 villages while consenting to be governed by delegating "only certain powers" to the central Hopi tribal government that are specifically stipulated in the present Hopi constitution.

A final example is if the Hopi voters pass Draft No. 24A, all the Hopi villages that do not currently participate in the Hopi tribal central government or send village council representatives such as Hotevilla, Shungopavi, Lower Mungapi, Walpi and Old Oraibi, "will be forced to reorganize against their will" and forever become a part of the central government through this new "Fourth Branch."

Attendees at the Flagstaff meeting agreed that each of their own Hopi political groups will work towards defeating the proposed draft at their own levels and within their own groups but that there is unified thought in stopping this Shingoitewa driven-election process, since each group was originally established for its own political purposes and did not see eye to eye on other areas, each with their own political ideas and strategies for changing Hopi government.

Another consideration to vote no to Chairman Shingoitewa's Constitution Task Team push is the statistical information listed on the present Constitutional Task team brochure that cites statistics such as the amount of attendees at their public meetings on informing the public about the new draft during the years of 2002 and 2003, which they say is their documentation to "public information."

According to Shingoitewa's task team brochure, they held 16 separate public village meetings to give public information and "allow input" from Hopis on the new constitution draft. The pamphlet lists the villages where the meetings were held and the numbers of people in attendance at each separate meeting.

On March 11, 2002, five people attended the meeting at Mishongnovi/Sipaulovi village. On July 10, 2003, three people attended a meeting in Kykotsmovi Village community center. Meetings were held in every Hopi village.

But a total number of people attending these 16 meetings to "give public information and input" was a grand total of 111 people for all 16 meetings over a two-year period.

The single Flagstaff public meeting last week alone had 50 tribal members, which is roughly one-half of the total number of people that attending all 16 of these reservation wide meetings. This demonstrates that the Hopi and Tewa public has not has the appropriate public input or public information on the new draft to thoroughly inform them of these major changes in the Hopi constitution.

"Stop the Election" activity will continue on the Hopi Reservation. Contact people for the varied groups are Monica Kahe/Mary Felter/Dale Sinquah/Jerry Sekayumptewa for Silent Majority at mjk62@nau.edu, Shungopavi traditional leadership Ronald Wadsworth/Bertha Parker at Bert9436@msn.com or (505) 552-5199 or the final group of off-reservation Hopis and longtime Hopi reservation organizers through Rosanda Suetopka Thayer at thirdmesaqueen@yahoo.com.