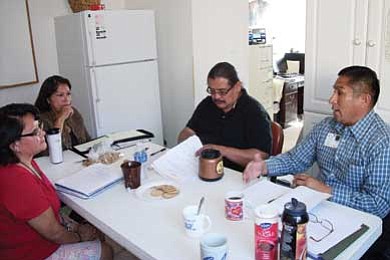 POLACCA, Ariz. - On Nov. 4 the Hopi Alliance Against Substance Abuse (HAASA) held its monthly meeting to discuss drug and alcohol concerns on the Hopi Reservation. HAASA is a grassroots community organization that was started to address substance abuse issues in the Hopi community. One of its objectives was to change Ordinance 21, which is Hopi law to include drug and alcohol as infractions of the law. HAASA worked diligently to make the change, but due the instability of the tribal government in the past couple years, the initiative didn't come to fruition. This is something that HAASA may revive again in the future. Other activities that HAASA has sponsored are the Sober Challenge Week, conducting surveys, sponsoring the Red Ribbon Parade and other activities.

On this particular night HAASA members concentrated on community events and concerns. The group was proud to have sponsored the annual Red Ribbon Parade in Kykotsmovi once again with seven floats and many spectators along the route. HAASA members also addressed the crowd at the rally after the event. In addition HAASA members participated in the Hotevilla Red Ribbon Day activities.

A concerned community member came to express his concerns about a local individual that was dealing drugs and felt he was endangering his community and family by his activities. He wanted to see if there was anything that could be done to bring awareness to this problem. HAASA scheduled a special meeting to seek ways to address his concern and how they could help on Nov. 23 at Shongopavi Community Center.

Special guest was Loren Sekayumptewa, the newly appointed Director of the Hopi Guidance Center. He came to let the group know that he was committed to being more engaged in the community to bring help to where it is needed. He has a long history of working in the health care field in Albuquerque as well as the Hopi Reservation from 1992-2000. He cited his accomplishments during his term on the Hotevilla Board as helping to build the Youth and Elderly Center. He visions building a treatment center on the reservation stating, "People need treatment not incarceration." He felt that some of the statistics about substance abuse were inaccurate due to non-reporting and "without accurate data problems can't be truly addressed." He wants to see more cooperation with local organizations to address the substance abuse problem.