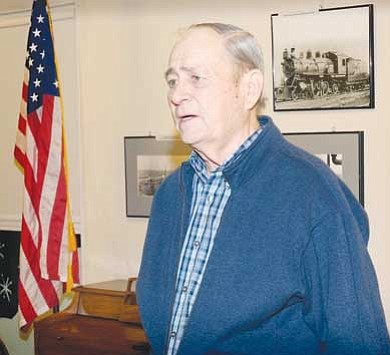 Todd Roth/NHO<BR> Bill Mead gives the President’s Report at the annual meeting of the Winslow Historical Society, which was held Nov. 12 at the Winslow Chamber of Commerce building.

WINSLOW, Ariz. - The historic Hubbell Trading Post was the site of the annual Historical Society and Old Trails Museum meeting, which was held on Friday, Nov. 12. The first hour encompassed finger foods, hot cider, coffee and photos of Winslow's historic schools, providing a look back to the early 1900s.

President Bill Mead then called the meeting to order, introduced the board members and provided the President's Report for the past fiscal year. Treasurer Dave Hartman gave the financial report, detailing the positive financial balance and projection for small expenditures on the museum roof for this year.

Old Trails Museum Director Ann-Mary Lutzick detailed the accomplishments of this year including the new Historic Winslow Schools Calendar and the expanded gift shop displays. She reminded everyone that the museum gift shop had high quality Native American crafts and jewelry, ideal for Christmas gift giving. Lutzick also explained the upcoming projects, including participation in the Arizona Centennial Celebration, occurring in 2011 and 2012.

The meeting was concluded with the election of new officers and a door prize.