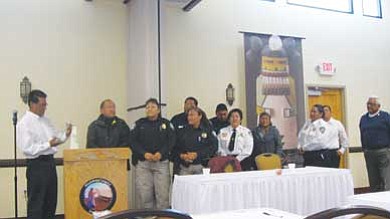 Tyler Tawahongva/NHO<BR> Hopi Rangers are honored during Upper Moenkopi’s annual Law and Order Day, which was held in the Village of Upper Moenkopi on Nov. 10.

The Governor of the Upper Village of Moenkopi gave the welcoming address. He expressed his gratitude to the Law and Order Committee. Former patrolman Wayne Kuwanhyoima, now a Hopi council member, remarked about his respect for Dennis Bowen, who was in attendance. He mentioned that when Bowen first came to the reservation, he pulled him over thinking that he may have been a radical American Indian Movement (AIM) leader with his long hair. Kuwanhyoima thanked Bowen for his long term friendship.

He also brought to remembrance officers that were lost in the line of duty and how dangerous the job has become.

One noted loss was Officer Dean James, who was shot on Highway 264 west of Dinebito Junction. He recalled being at a meeting and getting the call. When he went out there, he was informed that it was a fellow patrolman that was killed by his own people. He felt that these patrolmen should be acknowledged for their service to the community.

Leroy Sumatztkuku, Hopi council member, commented that it takes a combined effort to bring law and order, stating, "It takes family and community support to continue this profession."

In recognition of their services, each law enforcement organization was given awards. Honorees included the Hopi BIA Police Department.

Navajo law enforcement was also recognized, as were the Hopi Resource Enforcement Services and the Navajo Criminal Investigations Office.

Speakers included Sgt. Roderick Holmes from the Hopi Rangers, who spoke about the need for a change in the Hopi Law or Ordinance 21 that doesn't address the stray animal issue that is faced by many of the Hopi villages, and Tuba City.

He stated that many cities and towns have animal control facilities and that Hopi can establish these services to address this issue. He also spoke of one memorable animal control experience where he was called to get a bear out of a tree on the Navajo Reservation. He recalled the time he "wrestled a bear" to the delight of the audience.

He commented on recent incidents on Hopi where violence was fueled by methamphetamine usage. He noted that more violent crimes are being committed, but that they are building up the police force. He says he voiced the concerns of the Moenkopi community to his supervisor and now they have two officers stationed in Upper Moenkopi.

He also stressed the need to "break down the barriers between community and police."

Ruth Began with the Tuba City Regional Health Care Center presented statistics regarding meth usage in the Tuba City service unit. The noted trends were meth usage was down for younger people, which is credited to prevention efforts in the community. The opportunity that exists is that many times in the emergency rooms meth users are stabilized and released without any aftercare options.

Meth labs can be very compact and can be setup in the trunk of a car or a hotel room, resulting in an environmental hazard due to the chemicals used.

Jeremy King, member of the Law and Order Committee, closed the day by thanking everyone in attendance. Even though the attendance was modest he felt that it was a success based on the people who attended and the networking that took place was good for the community.

King is already looking forward to a bigger and better Law and Order Day next year.