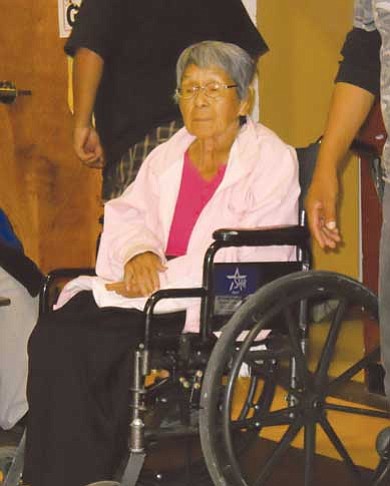 Rosanda Suetopka Thayer/NHO <BR> Ethel Sahmie, who holds the distinction of being the first Hopi woman to serve in the military, was given a standing ovation during a community recognition ceremony held on Nov. 11 in Kykotsmovi. Sahmie served in the Army/Air Corp.

KYKOTSMOVI, Ariz. - Hopi veterans were overheard joking with one another about the Nov. 11 Veteran's Day celebration at Hopi Day School, saying that "it was packed tighter than the kiva on a night dance."

And they were right.

Geno Talas, current Director of Hopi Veterans Services, coordinated the event with the help of several Hopi organizations, including the Kykotsmovi Elderly Program who coordinated the meal.

Diane Lucero was in charge of the kitchen staff and crew, which included family members of Hopi veterans who assisted with cooking 14 turkeys complete with the trimmings. Community members donated side dishes.

Miss Hopi Johnetta Honie was also there with First Attendant Jenna Lamson. They asked for donations of gift items for current active duty military members from Hopi. Items would need to be donated no later than Jan. 31.

If you wish to make a donation or volunteer with packaging, contact the Miss Hopi committee at (928) 734-3436 or e-mail misshopicommittee@yahoo.com.

Posting of colors for the day's event was provided by American Legion Hopi Post No. 80 and the Hopi High ROTC program. The National anthem was sung by Renae Mahkewa. A Tewa flag song was sung by Randall Mahle and Pernell Mahle with an opening prayer by Leonard Talaswaima and closing prayer by Edmund Quotskuyva, a Hopi veteran from WWII.

Special recognition was given to the first Hopi woman to join the ranks of military service. Ethel Sahmie, who is now 89 years old, served in the Army/Air Corps. She received a standing ovation from the packed crowd for her personal contribution to her tribe and country's service in pursuit of freedom and honor.

A special slide show created by Gordon Mahkewa was shown at the event's end.