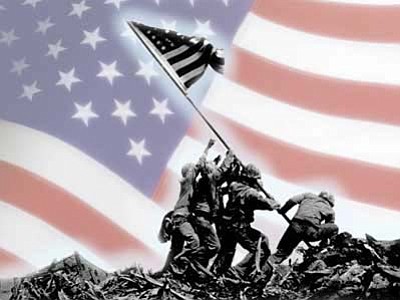 Last June a caravan of cars pulled into the Black Hills National Cemetery near Sturgis, S.D., to lay Clarence Wolf Guts, the last surviving Lakota Sioux code talker of World War II, to rest. In September, Allen Dale June, one of the original Navajo code talkers also passed away. While the Navajo are the best known, 15 other Indian tribes were also involved in the use of Indian languages in the top-secret code project, which began unofficially during World War I. Though declassified in 1968, their stories are still little known.

Veterans Day falls in the middle of American Indian Heritage Month, but those military men and many others, including Ira Hayes (Pima), who helped raise the iconic flag on Iwo Jima, and Gen. Clarence Tinker (Osage), who was the first U.S. general killed in World War II, are not names that come to mind for most people.

That's because this is not the usual story line of American Indian history portrayed in movies or taught in public schools. For most school children, November typically involves a few lessons in early Indian history, arts and crafts, and the national tragedies of the 19th century. This is important material, but after the lessons one of history's most influential indigenous populations is placed back in the closet until next year.

The Department of Defense is working to change this. For the last few years, they have used their Internet and media outlets to showcase the modern heritage that American Indians have brought to the armed forces of the United States for more than 150 years.

Gen. Ulysses S. Grant opened the door to the military for American Indians during the Civil War. New York Gov. Edwin Morgan had turned away Ely Parker's (Seneca) Iroquois volunteers, and Secretary of War Simon Cameron had declared that Parker's ethnicity wouldn't permit him to serve. Grant secured Parker's appointment as an engineer, and he rose to become the first American Indian general in U.S history. Meanwhile, on the Confederate side, Stand Watie (Cherokee) also rose to the rank of general and was the last commanding officer to surrender.

In 1866 Congress passed the Army Reorganization Act, allowing the employment of 1,000 Indian scouts in the western Indian campaigns. Alchesay (Apache) and 11 other Indians received the Medal of Honor for their actions in the campaigns. At first their loyalty was questioned, but only once in their

71-year history did scouts ever turn against their commanders. The scouts' crossed-arrow insignia was eventually adopted by U.S. Special Forces.

In WWI, 12,000 American Indians joined the armed forces, even though it wasn't until 1924 that American Indians were granted U.S. citizenship. Their unique combat abilities and survival skills, which had frustrated opponents for generations, became invaluable to the nation's combat collective.

In the Korean War Capt. Raymond Harvey (Chickasaw), Cpl. Mitchell Red Cloud (Ho-Chunk), and Pfc. Charles George (Cherokee) received Medals of Honor for their actions under fire. In Vietnam, 42,000 American Indians served, 90 percent of them volunteers. The nation's most decorated American Indian, 1st Lt. Pascal Poolaw (Kiowa) was killed in action with 42 decorations on a service record that reached back to WWII.

This is far from the Hollywood or schoolbook image. The ancient cultural heritage of American Indians is, of course, worthy of study and celebration, but this is the modern legacy that Americans should remember on Veterans Day.

(Ed Hooper is a veteran journalist and military affairs reporter and a writer for the History News Service.)