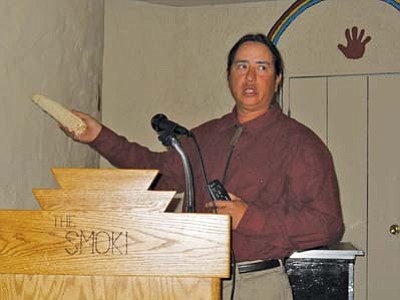 <i>Rosanda SuetopkaThayer/NHO</i><br> Michael Kotutwa Johnson, final year doctoral student at the University of Arizona was this year’s guest presenter at the Smoki Museum’s annual “Three Sisters: Honoring the Elders” fundraiser dinner last week. Johnson, who is studying in the field of Environmental Science and American Indian Studies, holds a sample ear of white Hopi corn that he grew utilizing the Hopi dry-farming method on his 11 acres of farmland on the Hopi reservation.

PRESCOTT, Ariz. - For the third year in a row, the Smoki Museum in Prescott and its board of museum trustees held their annual "Celebration of the Three Sisters; Honoring the Elders" dinner and lecture over the weekend of Oct. 23. Each yeat, the dinner offers a different subject topic on Native tribal culture.

This year's dinner was held to honor traditional Native foods that are still gathered, cooked and eaten by local tribal groups. This year, the intent was to educate attendees through a lecture series about the farming, cultivating and harvesting process of these organic crops.

Johnson is a doctoral candidate at University of Arizona in the field of natural resources and environment. He originally graduated from Winslow High School and went on to Cornell University, then completed his graduate work at Pepperdine University and finally settled on the doctoral program at UA.

Johnson was selected for this year's fundraiser, as his interest in Hopi farming is not just scientific but a personal venture and lifestyle.

"Hopi is the ultimate example of sustainability and durability; the way we farm and how we hold our home communities together." He stated. "Hopis at our reservation still do things the old and proven way and younger Hopis are encouraged to practice these methods even today. Things like Hopi dry farming, Hopi house building - things that you can learn about Hopi soil and moisture - you can't learn these subjects in a western science institution. These proven Hopi science methods must be learned at home."

In northern Arizona area, the average yearly rainfall is about 12 inches or less. The Hopi crops that Johnson discussed and shared with the dinner audience is totally dependent on natural precipitation and dry-farming methods that are based on Hopi science methods, keen observation, faith and what the ancestors say is "a heart full of prayer."

According to Hopi oral tradition, when the world was first created, corn was offered as sustenance. While other world ethnic people chose more colorful ears of corn, the Hopi chose the shortest blue eared corn. It is this special blue corn that Hopis are most recognized for, and it's used throughout the year for ceremonies, eating, and in preparation of specific food gifts for special occasions or religious activity.

There is a special reverence for Hopi farmers who practice dry farming since there isn't much moisture or rain to sustain these highly viable crops.

Farming is a big part of Hopi life, and what is communally understood as a "spiritual covenant." Agricultural teachings are what were given to Hopis by their original creator for long term survival and are still done pretty much exclusively by hand.

Locations for planting Hopi crops are in the areas below the mesa tops in the washes, the small areas that separate the larger plateaus.

Johnson shared his methods and practices for growing these Hopi organic crops that he plants and harvests on his 11 acres of land in Kykotsmovi.

He also shared a final conclusive note, "One must first understand one's own environment before one can work within that niche. I contend, that our survival, like Hopi crops, are dependent upon the interaction of all living and non-living things to help us preserve the delicate balance we may or may not realize we are all a part of."