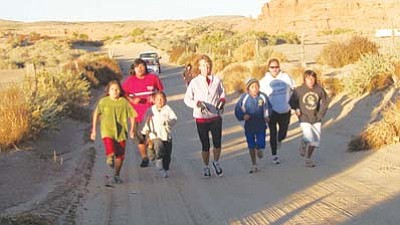 <i>Tyler Tawahongva/NHO</i><br> A number of Hopi students and adults participated in the Red Ribbon Relay, which was held at sunrise on Oct. 28. The relay began in both Spider Mound (east) and Moenkopi (west). The runners eventually met at Hopi Day School in Kykotsmovi where a parade (below) was held to recognize those who continue the fight against drug and alcohol abuse.

HOPI RESERVATION, Ariz. - On the Hopi Reservation, October has been proclaimed Red Ribbon Month and this year's activities highlighted this crisis of drug and alcohol abuse on the reservation. Many groups held events to bring awareness to this problem.

On Oct. 21 and 22, the Hopi Substance Abuse and Prevention Center hosted a screening of "Lost in Woonsocket" at different locations on the Hopi reservation. The screening was presented by Jacque Gencarelle from the Northern Arizona Behavioral Health Authority (NARBHA). The film is about a group of individuals that had a show on A&E who found people that were in need and tried to help them.

One particular gentleman they approached was an alcoholic on the streets of Woonsocket, R.I. He was living in a tent in the woods with his friend. They convinced him to enter detox and document his experience. The movie sends a powerful message to the reality of recovery and the challenges one faces. One individual in Shungopavi even remarked that this is applicable to the Hopis.

Gencarelle has shown the film in different locations throughout northern Arizona, but the showings in Hopi were her best attended and prompted much discussion. The locations were at the Hopi Jr/Sr High School, First Mesa and Shongopavi Community Centers. The film will have a final showing in Flagstaff at the Orpheum Theater on Nov. 17 where one of the individuals featured in the documentary and the filmmakers will be in attendance.

Another noteworthy event was the appearance of Susan Vanderlip, a motivational speaker that uses theatrical impersonation to convey her message about substance abuse. Her first husband was an alcoholic and an addict. Even though she didn't use drugs or drink she was seriously affected by his behavior. She couldn't leave and sought help from the Al-Anon program which is similar to the Alcoholics Anonymous program but is a program for individuals that have a relative that is an alcoholic or drug user.

Vandelip eventually left her ex-husband who, within months, died from his addictions. Now she goes throughout the U.S. and stages a one woman show. One character that is part of her performance is Julio, a "gang banger" that wants to have a better life. After the performance, she gave classroom presentation and engaged the students in discussions along with Preston Clockson, substance abuse counselor at Hopi Jr. High and staff from the Hopi Substance Abuse Prevention Center (HSAPC). The students were very receptive to the information being provided.

Hopi High School also invited wellness workers from the community to speak to the students about substance abuse awareness. Members from the HSAPC gave presentations about recovery and diet and how important it is to eat right in recovery as well as in normal life. Many times on the Hopi Reservation, it is difficult to find healthy foods. If you go into a store, much of the selections are highly processed foods that are not very healthy choices. Kevin Nash stressed the importance of a healthy diet for everyone and to make the right food choices. Another HSAPC employee spoke to juniors and seniors about his experiences and how a lot of times we make the wrong decisions. He spoke to the kids about making right choices and being focused on their future while balancing both Hopi and the western culture.

One communitywide event is the annual Red Ribbon Relay and Parade, which was held on Oct. 28. The relay started from both sides of the reservation - Spider Mound in the east and Moenkopi in the west. The runners started at sunrise and met at the Hopi Day School. A parade later went through Kykotsmovi and ended at the tribal offices where presentations were given by individuals in the wellness community and tribal officials. Throughout the day, the runners went to each of the schools where they held various Red Ribbon events. This relay occurs each year and brings the community together to bring awareness of the drug and alcohol problem on the Hopi Reservation.

At the end of the parade, Vice-Chairman Honanie accepted ears of corn carried by the runners from both sides of the reservation. He then spoke about the seriousness of the drug and alcohol issue on the reservation. Loren Sekayumptewa, director of the Behavioral Health services stated that he would like to reach out to the community to let them know that he takes his job seriously. President of the Hopi Alliance Against Substance Abuse, a grassroots organization, led the people through a cheer of "Stand Tall, Be Strong and Be Proud." Carlton Timms from Community Bridges in Winslow spoke of the relationship of substance abuse and suicide and the need to realize the threat to individuals. Another individual spoke about the need for action and that things don't change by themselves, stating, "There is a need for community action."

Hotevilla Bacavi Community School also hosted Red Ribbon Day activities with an assembly where Miss Hopi and her First Attendant spoke to the children. Jenna Lamson led the students through the Morning Prayer song to the delight of everyone in attendance. The day was capped off with a parade through the village with the students chanting, "No more alcohol, no more bootlegging, no more drugs."

The Hopi community continues to be aware of the drug and alcohol problem that it faces and continuing events such as these throughout the year would reinforce the message.